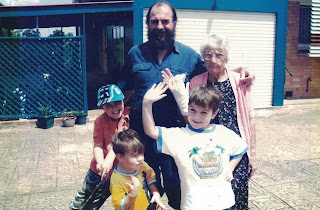 Mum was devastated when Jack died. She would carry a photo of him around with her in her purse "so he wouldn't get lonely". Later, in the nursing home, as her body failed her, that same picture of Jack would watch over her as she slept through the long marches of the night. When mum died, one of Jack's childhood drawings accompanied mum on her last journey.

Two years on from that terrible day so much has changed and so little. SmallestOne's birthday is now bracketed by two sad event's, the loss of his gran and his brother. He may not fully understand why we didn't want to buy him Call of Duty, Black Ops on the 100th anniversary of the end of the War to End all Wars, with the memory of his decorated gran's poppy service still fresh. Now he is swinging with Spider Man instead. 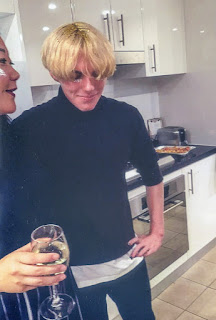 Two years on and we are no closer to knowing why Jack died. SmallestOne has been given a clean bill of health, but they want to do more tests on me to check for some rare possibilities.

Two years on we follow his friends progress through their lives. There has been ups and down, but they are progressing well, becoming confident young men in a larger world.

Peta and I cry less at random bitter sweet reminders of his life, but I still can't listen to Paul Kelly's "Making Gravy" without tears. I have no idea why this song reminds me of Jack so much or fill me with such loss.

Two years on and SmallestOne progressively faces the challenges of being on the Spectrum, he can ride a bike now, a feat he could not achieve before. This has changed him measurably and he faces the world with more confidence.

Tonight, on the second anniversary of Jack's death, MiddleOne plays in the final concert of his first year at Uni as a Sonic Arts student. The next year without Jack will start with Avant Gard sounds and new hope for the future.

Comments:
Our thoughts are with you all Ian

Thank you very much.