Seeing comet 46P Wirtanen at its brightest from Australia


Comet 46P is on track to be the brightest comet of this year. Currently magnitude 5.0, it is set to pass pass Earth at 0.0781 AU (~30 time the distance between the earth and Moon), this makes it the 10th closest comet to pass Earth in the modern era.

It is still a bit uncertain how bright it will get but it should get to between magnitude 4 and possibly as bright as  magnitude 3 (about as bright as gamma Crucis, the fifth brightest star in the Southern Cross).

The comet will be brightest between December 13 to December 19. It will be closest to the Sun on the 13th, and closest to Earth on the 16th (just after midnight on the 17th of AEDST).

However, although potentially bright, its fussy, diffuse nature means it will be difficult to spot with the unaided eye under suburban conditions. Even under dark sky conditions it will be a faint fuzzy dot. Despite breathless statements about it being "as big as the full Moon" the comet is so diffuse you can only see this extended coma with long exposure camera images, not with the eye.

However, there are already reports of the  comet being visible to the unaided eye under dark sky conditions in Australia, and it is being picked up by simple DSLR cameras. It is readily visible in strong binoculars and small telescopes, but you will need a serious telescope and astronomical camera to pick up any detail, including the faint tail. 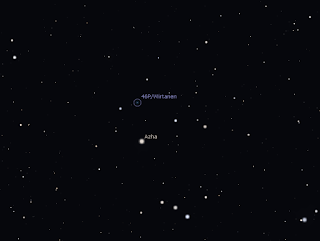 Simulated binocular view as seen from Adelaide at 22:06 ACDST on Tuesday the 20th of November (90 minutes after sunset). The view is of the area around star Azha (eta (η) Eridani see charts above and below). Similar views will be seen throughout Australia at the equivalent local time (90 minutes after sunset). Click to embiggen. On the 7th the comet will be about the same distance below Azha.

The comet is a reasonably easy target for binoculars, unfortunately the waxing moon will make it harder to spot  during the time when it is brightest.

However, if you wait until Moon set (around midnight on the 13th and 2 am on the 17th (actually, for the east coast on daylight savings time the comet is closest just after midnight), the comet will be reasonably high above the northern sky and in a good position to view.

The comet is now is an area where there are useful guide stars. 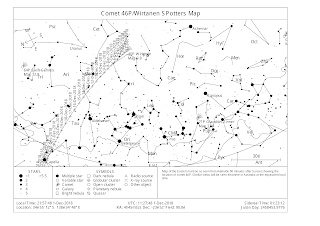 At the moment the best way to find it is draw an imaginary line between Sirius and Rigel, then continue on until you reach the next brightest star Menkar (α Ceti) that is the constellation of Cetus. Then back off about a hand-span and up two and you will come to the brightish star Azha (eta (η) Eridani) on the 6th the comet is above, and on the 7th below this star.

The comet is moving rapidly as it comes close to the Earth. While it won't "whizz" across the sky it will move substantially night to night.