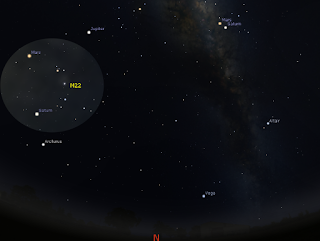 The March edition of Southern Skywatch is  now up.

This month  still sees most of the action move in the morning sky. Speedy Mercury  and Venus are low in the evening sky, but Venus will be hard to see until the end of the month.


Jupiter enters the evening sky, but is still best seen in the morning sky.

Mars passes between the Trifid and Lagoon Nebula and closes in on Saturn and M22.


March 19, Crescent Moon above Venus and Mercury in the twilight.