The First Quarter Moon is Friday, February 23. At this time it is in the Hyades cluster, and occults some brightish stars. Mars, bright Jupiter and Saturn form a line together with the bright stars Antares and Spica in the morning skies. Saturn is in binocular range of some interesting nebula. The asteroid Ceres is visible in binoculars.

The First Quarter Moon is Friday, February 23. At this time it is in the Hyades cluster, and occults Delta 1 and Delta 2 Taurii. These are reasonably bright, but the occulation is close to the horizon. The Moon is at Perigee, when it is closest to the Earth, on the 28th. 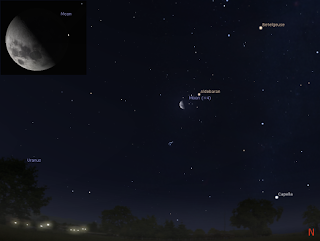 Evening sky on Friday, February 23 looking west as seen from Adelaide at 20:58 ACDST (60 minutes after sunset). The waxing Moon is near the Hyades. The inset shows the Moon at 23:21 ACDST, when the Moon is about to cover Delta 1 Taurii.

For many locations in Australia the First Quarter Moon occults the stars Delta 1 and Delta 2 Taurii. These are reasonably bright, but the occulation is close to the horizon. and may be best viewed with binoculars.

Similar views will be seen throughout Australia at the equivalent local time (60 minutes after sunset, click to embiggen). Occulation times for Melbourne is midnight, Sydney is 00:16 on the 25th and Perth is 20:31. 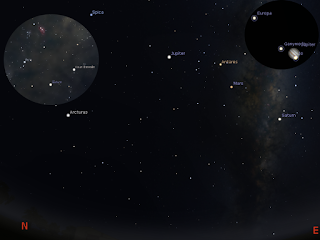 Morning sky on Saturday February 17 looking east as seen from Adelaide at 5:21 ACDST (90 minutes before sunrise). Mars is moving away from Antares.

The large inset is a simulated binocular view of Saturn.  Saturn is close to the Lagoon and Triffid Nebulae and the globular cluster M22. The small inset is a telescopic view of Jupiter at 1:30 am Sunday February 25 ACDST as Io and its shadow cross Jupiter s face. 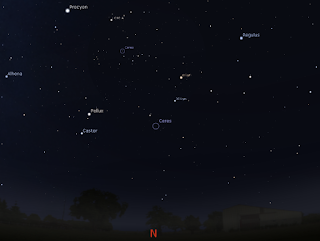 Evening sky on Saturday February 17 looking north as seen from Adelaide at 23:55 ACDST the asteroid Ceres is close to the bottom star of the constellation of Cancer, the crab. 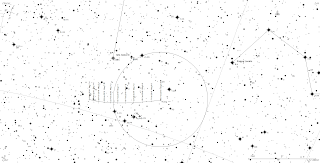 Ceres is relatively easy to find. It is above the northern horizon just before midnight , and is below Iota Cancerii (the bottom brightish star of Cancer. You may need to watch night to night as the asteroid moves to be sure of its identity.

Venus  returns to the evening twilight. but is very difficult to see, being just a finger-width above the horizon 30 minutes after sunset.

Jupiter  is rising about midnight, it is very high in the morning sky above the northern horizon  and is moving away from Mars.

Mars is moving down the body of Scorpius the scorpion. Mars moves away from Antares (the rival of Mars) over the week but is still reasonably close to see the contrasts of the two different red objects.