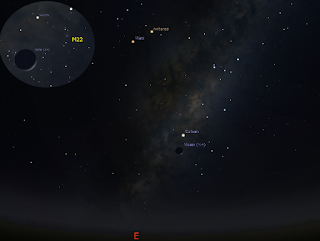 Evening sky as seen on February 12 at 5:13 ACDST, with the crescent Moon close to Saturn and globular cluster M22. The inset shows the binocular view. Similar views will be seen elsewhere in Australia at the equivalent local time (90 minutes before sunrise click to embiggen).

The February edition of Southern Skywatch is  now up.

This month  still sees most of the action move in the morning sky. Speedy Mercury  and Venus return to the evening sky, but Venus will be hard to see until next month.


Saturn is close to the Triffid and Lagoon nebulas and several clusters this month.

February 12; Saturn and crescent Moon close, with M22 nearby.