The Last Quarter Moon is  Thursday, January 25. The variable star Mira is close to maximum. Mars and bright Jupiter are close together. Saturn and Mercury are visible in the morning sky and forms a line with the star Antares, Mars, Jupiter and the star Spica. Mercury is low in the twilight by the end of the week. The asteroid Ceres is visible in binoculars by mid-week. 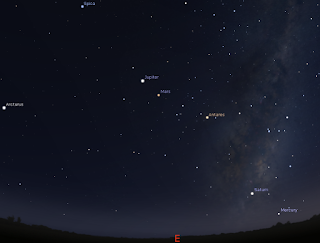 Morning sky on Saturday January 20 looking east as seen from Adelaide at 5:19 ACDST (60 minutes before sunrise). Jupiter, Mars Saturn and Mercury form a line in the morning sky with the bright stars Antares and Spica.


Similar views will be seen throughout Australia at the equivalent local time (that is 60 minutes before sunrise, click to embiggen). 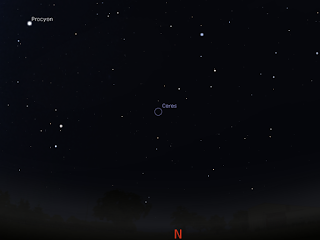 Morning sky on Saturday January 20 looking north as seen from Adelaide at 3:00 ACDST the asteroid Ceres is just below the sickle of Leo. 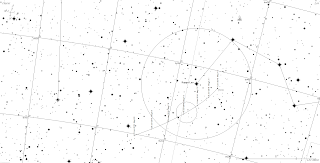 The large circle represents the field of view of 10x50 binoculars. The small that of a 4" Newtonian telescope with a 24 mm eyepiece. Use the horizon charts for orientation first.

The asteroid 1 Ceres is relatively easily visible in binoculars form around the middle of this month, it brightens during this time but there is significant interference from Moonlight by the end of the month.

Ceres is relatively easy to find. It is above the northern horizon at astronomical twilight in the morning, and is just below Kappa Leo. The brightish star the is the tip of the sickle of Leo (see charts, if you centre your binoculars on Kappa Leo Ceres will be just below it). You may need to watch night to night as the asteroid moves to be sure of its identity..

Jupiter climbs still  higher in the morning sky and is moving away from Mars after their spectacular conjunction last week.


Mars is moving away from Jupiter after their spectacular conjunction last week.

Mercury is dropping back towards the horizon this week.

Saturn climbs higher in the morning sky, leaving Mercury behind. 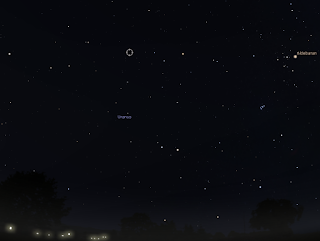 Evening sky on Saturday January 20 looking north-west as seen from Adelaide at 22:11 ACDST (90 minutes after sunset). (click to embiggen)

The long period variable star Mira is now near peak brightness, and is easily visible to the unaided eye, even in Moonlight.  The circle marks the location of Mira in the rambling constellation of Cetus. The Arrow shaped head of  Taurus the bull points almost directly at Mira. This is a good time to see this iconic variable star

Ian, I think you may have your moon phase a little muddled