The Full Moon is Monday June 20. Earth is a solstice on June 21. Jupiter is visible most of the evening. Mars and Saturn are visible all night long. Saturn is close to the red star Antares and forms a triangle with Mars. On June 18 Mars, Saturn, Antares and the Moon form a diamond shape. Mercury forms a second eye for Taurus in the morning sky. Venus is lost in the twilight. Comet C/2013 X1 PanSTARRS is visible in binoculars in the morning sky.

The Full Moon is Monday June 20.  Earth is a solstice, when the day is shortest, on June 21. 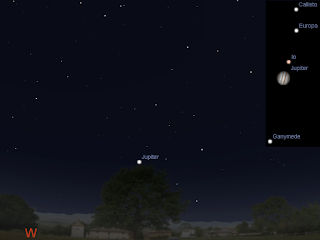 Evening sky on Saturday June 18 looking west as seen from Adelaide at 22:00 ACST. The inset is the telescopic view of Jupiter at this time. Similar views will be seen elsewhere in Australia at the equivalent local time. (click to embiggen).

Jupiter is in the north-western evening sky as the sun sets, and is  good for telescopic observation from around 18:00 on until around 10:30 pm when it will be a little too close to the horizon. Jupiter's Moons will be an excellent sight all evening. 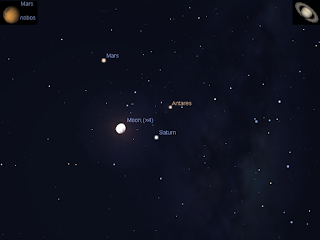 Evening sky on Saturday June 18 looking east as seen from Adelaide at 22:00 ACST. Mars, Saturn the Moon and Antares form a diamond. The inset shows telescopic views of Mars and Saturn. Similar views will be seen elsewhere in Australia at the equivalent local time. (click to embiggen).

Mars spends the week moving through Libra. Mars forms a line with the star Dschubba in the head of the Scorpion and Anatres.  As well Mars forms a triangle with Saturn and the red star Antares. Mars was at opposition on May 22, but Mars will still  be big and bright for this week. It is visible all night long. In even small telescopes Mars will be a visible disk, and you should see its markings.

The waxing Moon is close to Mars on the 17th and 18th, on the 18th the Moon forms a diamond shape with Mars, Saturn and Antares. 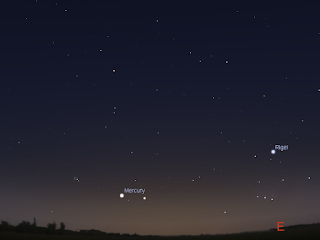 Morning sky at 6:30 ACST facing east as seen from Adelaide on Saturday June 18. Similar views will be seen elsewhere in Australia at the equivalent local time. (click to embiggen).

Mercury slowly heads towards the horizon this week. On the 18th and 19th Mercury is close to the bright red star Alebaran, forming a second eye the the head of Taurus the Bull.

Comet C/2013 X1 (PANSTARRS) rises  around 8:00 pm local time, but doesn't really clear the horizon murk until around 11 pm, and is still best between 3-4 am.  It is currently around magnitude 6.4. However, the brightening Moon will interfere with seeing it. A guide to seeing it is here. 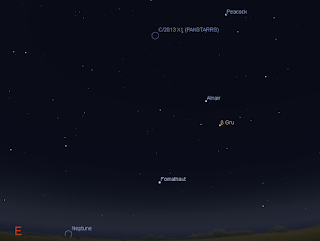 Eastern morning sky at 11 pm ACST, 18 June as seen from Adelaide showing the location of Comet  C/2013 X1 (PANSTARRS) . Similar views will be seen elsewhere in Australia at the equivalent local time (and most of the Southern Hemisphere). Click to embiggen.