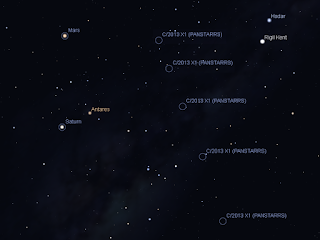 Eastern evening sky at 9:00 pm ACST, 24 June - 14 July showing the path of comet C/2013 X1 as seen from Adelaide. The positions are for the 24th, 29th, 4th, 9th, and 14th (getting higher as the month wears on). Similar views will be seen elsewhere in Australia at the equivalent local time (and most of the Southern Hemisphere). Click to embiggen.

The good news is that Comet C/2013 X1 (PANSTARRS) is now high in the evening sky to be visible without having to stay up past midnight. The comet was closest to the earth on June 21, so should be at it's brightest over the next few days. The bad news is (apart from most of Australia being hit by severe storms for the next few days) is that it is too close to the Moon until the 24th to be easily seen. 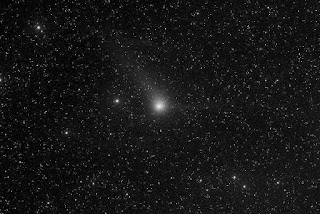 The most recent reports had it around magnitude 6.2, just below unaided eye visibility and bright enough to be seen readily in binoculars  (10x50's should work well). Over the next three weeks it will fade, and may have fallen to magnitude 7 (still visible in good binoculars) by the middle of July.

Comet C/2013 X1 is showing a nice double tail in deep telescopic imaging, and there was a recent spectacular tail dissociation event as well, but with visual observation the comet is more like a ball of cotton wool with a green tinge. It is at a suitable height for viewing from around 9 pm to astronomical twilight in the morning. 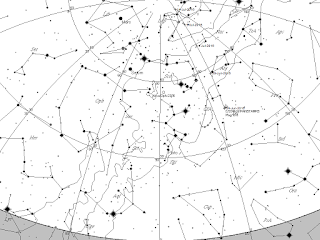 Printable black and white spotters map of the eastern evening sky at 9:00 pm showing the track of comet C/2013 X1 over the next 3 weeks. Click to embiggen and print

Ironically, the comet is currently in the constellation Telescopium (the telescope). Being close to earth (well. 0.64 AU, a little over half the distance from the Earth to the Sun) it is moving rapidly night to night for the next few weeks, passing through Ara the Altar, Norma the compass and Lupus the wolf.

It is close to a number of brightish stars, unfortunately in rather obscure constellations (see above), but not far from some distinctive constellations (Sagittarius and Scorpius), which makes it relatively easy to star hop to for most of June and July.

At 9:00 pm (when the sky is full dark and the comet is well above the horizon). almost directly above the eastern horizon is recognisable "teapot" of Sagittarius, with the curl of Scorpius above it.

From the 24th-27th locate the brightest star in the Teapot (Kaus Australis, epsilon Sag, at the base of the "spout"). With binoculars, sweep to the south a little over two binocular fields, past the curve of stars that is Corona Australis, and within that area the only fuzzy blob will be the comet. On the 26th the comet will be near the brightish star Zeta Telescopii.On the 27th the comet will be next to the brightish star Theta Ara (see the binocular charts). 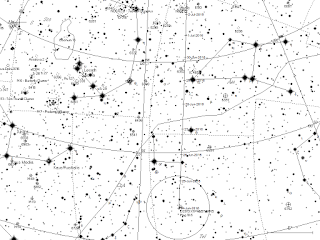 Black and white binocular chart suitable for printing, showing a higher power view of the area around the comet from 24 June to 1 July. Use in conjunction with the spotters map above. The circle is the field of view of 10x50 binoculars. Click to embiggen and print.

From now on the task of finding the comet is more difficult, the comet is fading, there are fewer bright guide stars, and lots of faint clusters that can be confused with the comet, the only real way to tell them apart is to watch for the comet moving night to night (or over the course of the night, if you want to stay up for hours). 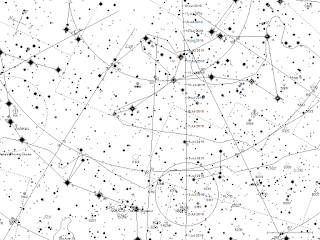 Black and white binocular chart suitable for printing,  showing a higher power view of the area around the comet from 1 July to 14 July. Use in conjunction with the spotters map above. The circle is the field of view of 10x50

From the 3rd to the 6th, sweep diagonally up and south from the cluster of stars in the tail of Scorpius call the "false comet" for obvious reasons, or table of Scorpius, by between one to one and a half binocular widths. On the 4th the comet is close to Epsilon Norma, and on the 6th close to Delta Norm.

From the 6th  to the 12th the comet is roughly in the middle between bright red Antares and orange alpha Centauri.

Could I quote some of the 'current events' from your astroblog in an Astrophysics Podcast I am assembling?

Any quotes will be fully attributed and I will also provide a link to your Astroblog.

Thanks for considering this request.
Brendan