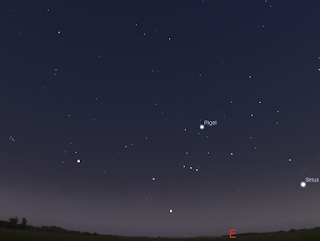 Evening sky on Saturday December 5 looking east as seen from Adelaide at 21:00 ACST.  The beautiful cluster the Pleiades, the Hyades and Orion . Similar views will be seen elsewhere in Australia at the equivalent local time. (click to embiggen).

But while the evening is devoid of bright planets, the summer constellations of Taurus (with the V shaped cluster the Hyades forming the head of Taurus the Bull and the beautiful Pleiades cluster nearby) Orion the Hunter and Canis Major with bright Sirius, the dog star, climbing above the eastern horizon. 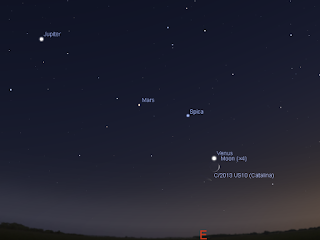 Early morning sky on Tuesday December 8 looking east as seen from Adelaide at 5:00 ACDST showing Jupiter,  Mars, and Venus, The crescent Moon and comet C/2013 US10.  Similar views will be seen elsewhere in Australia at the equivalent local time. (click to embiggen).

Jupiter, Mars, Venus and the bright stars Regulus and Spica form a line in the sky this week. The waning Moon joins the line-up making for some very nice morning sights with The Moon visiting Jupiter, Mars and then Venus.

Comet C/2013 US10 joins the line-up.  It is much fainter than anticipated and at magnitude 6.1, and being low to the horizon, it is probably a telescope only object. However, on the 8th it is below Venus and the thin crescent Moon, and may be visible in good binoculars.