The First Quarter Moon is Saturday December 19. The Moon is at perigee, closest to the Earth, on the 21st. Earth is at solstice, when the day is longest, on the 22nd. 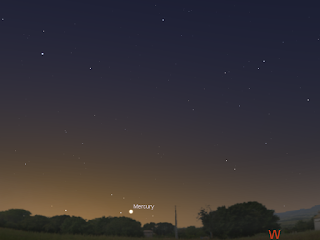 Evening sky on Saturday December 19 looking east as seen from Adelaide at 21:15 ACDST.  Mercury is just above the horizon in the late twilight. Similar views will be seen elsewhere in Australia at the equivalent local time. (click to embiggen).

Mercury climbs higher in the twilight. 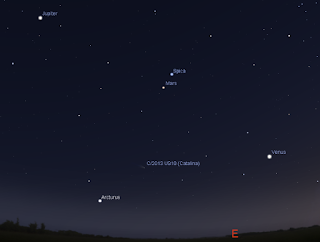 Early morning sky on Thursday December 24 looking east as seen from Adelaide at 5:00 ACDST showing Jupiter,  Mars, Venus and comet C/2013 US10.  Similar views will be seen elsewhere in Australia at the equivalent local time. (click to embiggen).

Jupiter, Mars, Venus and the bright stars Regulus and Spica form a line in the sky this week. Mars comes closer to the bright star Spica, and is closet on the morning of the 24th.