The New Moon is Sunday February 10. Jupiter is prominent in the evening sky. Saturn is visible high in the morning sky. Venus is low on the horizon and is visited by the crescent Moon on the 9th. Comet C/2012 F6 (Lemmon) continues to brighten and comes close to the Small Magellanic cloud. Comet C/2011 L4 PANSTARRS may be visible in the evening twilight. 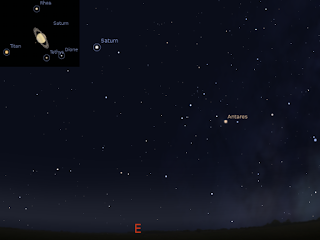 Morning sky on Sunday February 10 looking east as seen from Adelaide at 3:00 am local daylight saving time in South Australia. The inset shows a telescopic view of Saturn at this time. Similar views will be seen elsewhere at the equivalent local time (click to embiggen).

The New Moon is Sunday February 10.

Saturn is now readily visible above the north-eastern horizon before dawn. Saturn climbs higher in the morning sky, becoming easier to see.  Saturn rises shortly after midnight, so it is high enough to be worthwhile in a small telescope in the pre-dawn dark. Saturn is in the constellation of Libra. 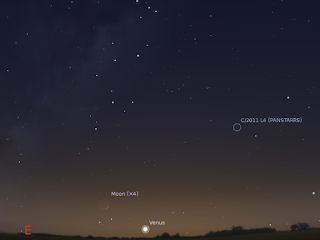 Morning sky on Saturday February 9 looking east as seen from Adelaide at 5:56 am local daylight saving time in South Australia (about 3/4 of an hour before dawn). Similar views will be seen elsewhere at the equivalent local time (click to embiggen).

Bright white Venus is now quite low above the eastern horizon, really only visible half an hour before sunrise and hard to see from cluttered horizons. Venus is visited by the crescent Moon on the morning of Saturday the 9th.

By the 14th the comet may be visible in the evening twilight to the east. The comet appears to be brightening more slowly than predicted, and it is not clear how bright it will be when it appears in the evening. To have a chance to see the comet you will need a fairly level, clear horizon like the ocean, and watch carefully as the twilight deepens. Binoculars may be needed to see it. For detailed viewing instructions see here. 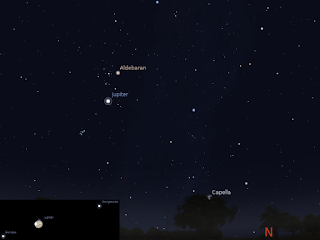 Evening sky looking North as seen from Adelaide at 22:00 pm local daylight saving time on Wednesday February 13. The inset shows Jupiter's Moons at this time. Similar views will be seen elsewhere at the equivalent local time.  Click to embiggen.

Jupiter is visible for most of the night, and is the brightest object in the evening sky. Despite opposition having just passed on the December the 3rd 2012, Jupiter is prominent in the northern early evening sky, being quite visible in the twilight. Jupiter is below the Hyades, near the red star Aldebaran. Jupiter remains near Aldebaran during the week, making it look as if the Bull has two eyes.

On the 13th Io and its shadow transits Jupiter. 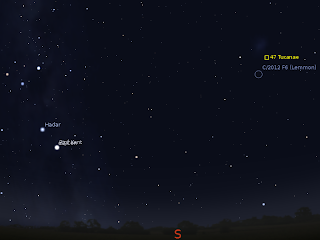 Comet C/2012 F6 Lemmon'slocation as seen from Adelaide at 22:00 ACDST on Thursday 14 February. The location of the bright globular cluster 47 Tucanae is indicated.  Similar views will be seen elsewhere in Australia and New Zealand at equivalent local times.  (click to embiggen).

Comet  C/2012 F6 (Lemmon) is a nice little binocular comet. The best view of this visit occurs then week when the comet will pass close to the Small Magellanic Cloud on February 14-15.

Comments:
I saw a fuzz ball - just not sure whether it was 47 Tuc or Lemmon!

G'Day Cynthia, if it was a faint fuz ball near the south celestial pole, it was the comet. If it was a large bright fuzzball, it was 47 Tucanae.

Carl, Ta for the heads up, fixed now.