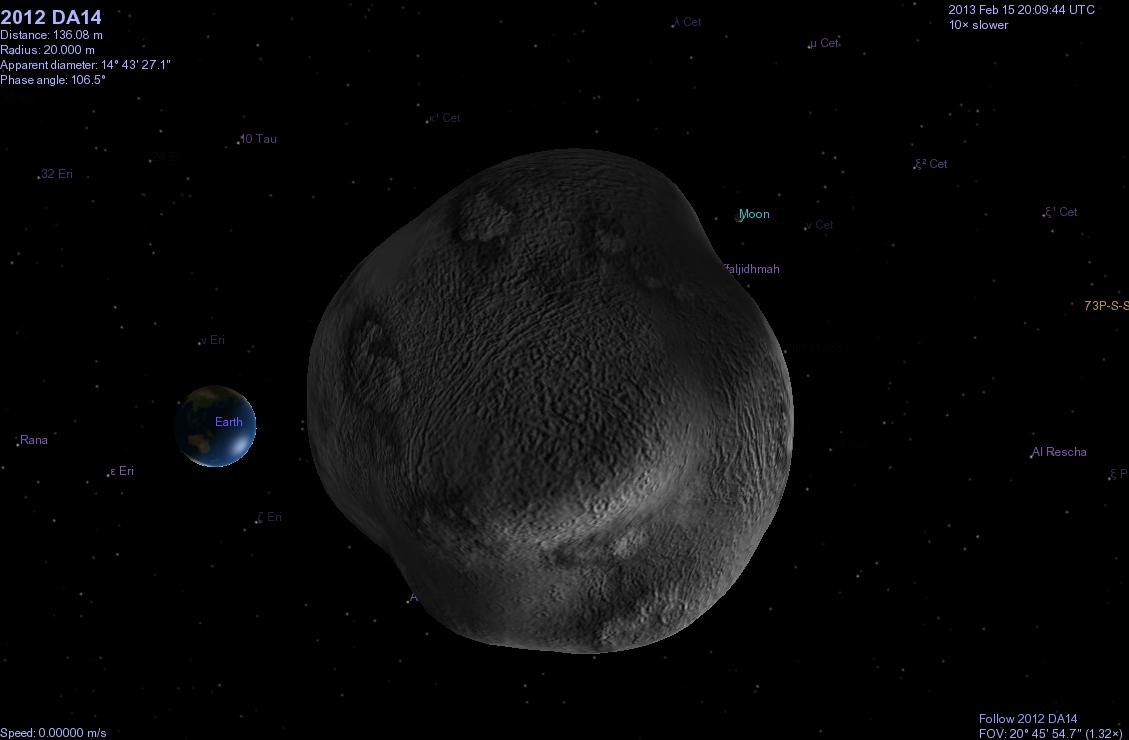 Near Earth Asteroid 2012 DA14 simulated in Celestia at the time of closest approach. Disappointingly, the simulated distance is out 10 fold (click to embiggen).

While we are waiting for the Near Earth Asteroid 2012 DA14 to come, I thought I'd set up a little Celestia file so you could play with it.

Unfortunately, like many planetarium programs, Celestia doesn't handle extreme close approaches well. Using the latest Minor Planet Center data, it places the asteroid at around 300,000 Km away at closest approach, instead of around 30,000 Km.

I've tried creating XYZ files for it, which should more accurately represent the orbit, but I'm obviously doing something wrong as they make the situation worse.

Anyway, here's the current file, have a play with it anyway.

Comments:
The Asteroid is a form of combination of Solid material which impact depends upon the speed to collide the place of Earth produced like power of Nuclear bomb to form on the place with light solid materiel as clouds which prevents of entering Sun rays result darkness and fail ere of formation of Natural activities.GutesWo

I tried this too with the latest data but again was out by 300,000k. I tried crudely changing some of the numbers but ended up further away. Perhaps Celestia's model of the Earth orbit doesn't quite take into account perturbations and wobbles. Oh well, it was a nice idea, thank you for making it.

Interesting, is it working in with the time accurately? Im looking for some kind of realtime 3D visualization for this Friday, so I can track exactly where it is and know when its about to pass over. Being in Australia I'll potentially have a good chance of seeing something.

To Alex Delderfield.
Download and instal Stellarium and add following text to "ssystem.ini" file. The file is located at "C:\Users\"YOUR USERNAME HERE"\AppData\Roaming\Stellarium\data\". You need to make few changes to text because comment area don't support formatting. Start new line from every point were you se ">" mark. Then remove ">" marks from the text. At bottom of following webpage you will se example of right formatting. http://www.stellarium.org/wiki/index.php/JPL_HORIZONS

Well actually it seems to support formatting. So just remove ">" marks from the code. Then you can use stellarium and track exactly where 2012 DA14 is and know when its about to pass over.

Sorry, Stellarium, SkyMap and a host of other planetarium program's can't show the orbit of 2012 DA14 accurately, this is from the Stellaroum discussion group

"The present method of calculating general orbits in stellarium is either comet_orbit or ell_orbit. These routines using oscillating elements are good enough for distant objects but are quite inaccurate for near earth passes."

This is true of most planetarium program's (and celestia it appears)

Celestia can use a spice kernel to do it. Check http://stkwans.blogspot.com/2013/02/2012-da14-in-celestia.html for instructions.