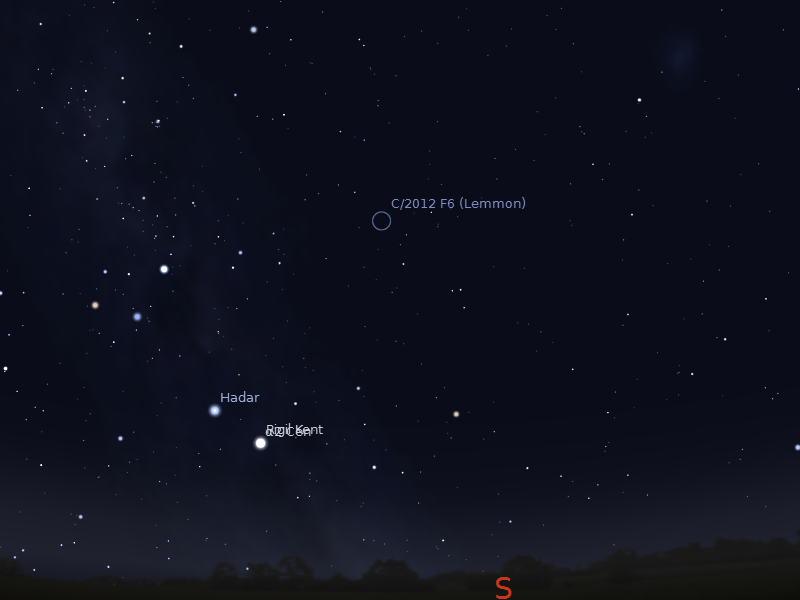 Comet F6 Lemmon has been gradually brightening, with the most recent reports suggesting that it is now  magnitude 6.1. This is at the threshold of visibility to the unaided eye under dark skies, but unfortunately the just-past-full Moon interferes until this Thursday, 31 January, then it can be easily followed with binoculars as the Moon rises later each night.

By the 14th and 15th it may be bright enough to be visible to the unaided eye under suburban skies. This would be great as on these dates the comet is near the Small Magellanic cloud and the brigh globular cluster 47 Tucanae, which can be seen as a fuzzy star to the unaided eye. This will look quite impressive in binoculars.

The comet is currently a fuzzy green dot. While not spectacular it is quite beautiful as seen in this image on the 20th from Rob Kaufmann,  another from the 24th here and he has a great animation of the comet going through the Southern Cross here. John Drummond of New Zealand has a nice telescopic shot here. Comet Al has a nice image and an animation taken with some unusual equipment.

Comments:
Thank you for this info :-)

Heads UP: New Comet C/2013 A1 "Siding Spring" was just discovered on 3rd January. If you check out the JPL simulator on fast FWD you will be amazed to discover this Comet is on a Collision Course with the Planet Mars on the 19-20th October 2014!
Check out this YT Video with the JPL orbit diagram:
(watch?v=35eRzZ72HYg).

Should be a spectacular show and is almost exactly 1 Year after Comet ISON has a "near miss" on Mars this 1st October 2013.

The nominal solution is a miss at 0.005 au (compare with 2012 DA14 which misses by 0.017 au), but the current uncertainty covers both an impact and a miss of 0.023 au. As the orbit gets refined we will know more, but this could be interesting.

Not Seeing a Transit of Io
EldestOne is an Even Number Old.
Australia Day, 2013
This Australia Day 2013, Find The Southern Cross
Jupiter and The ISS, 25 January 2013
Sketching Jupiter (or No Jupiter Hasn't Tilted)
The Sky This Week - Thursday January 24 to Thursda...
Bright ISS Passes Over Australia January 23-27, 2013
Daylight Jupiter 22 January 2013
Carnival of Space #285 is Here!