The Full Moon is Sunday January 27. Jupiter is prominent in the evening sky. Saturn is visible high in the morning sky. Venus is low on the horizon. There is a series of bright passes of the International Space Station this week. Comet C/2012 F6 (Lemmon) exits the Southern Cross. Comet C/2011 L4 PANSTARRS is visible in binoculars. 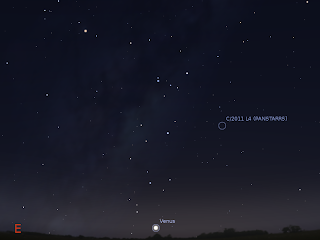 Morning sky on Saturday January 26 looking east as seen from Adelaide at 5:30 am local daylight saving time in South Australia. Similar views will be seen elsewhere at the equivalent local time (click to embiggen).


The Full Moon is Sunday January 27.

Venus spends the week in Sagittarius.

Comet C/2011 L4 PANSTARRS  is visible in telescopes and strong binoculars, but is rapidly washed out by the advancing twilight. In late February this may be a good unaided eye comet.

Saturn is now readily visible above the north-eastern horizon before dawn. Saturn climbs higher in the morning sky, becoming easier to see in the morning sky.  Saturn rises shortly after midnight, so it is high enough to be worthwhile in a small telescope in the pre-dawn dark. Saturn is in the constellation of Libra. 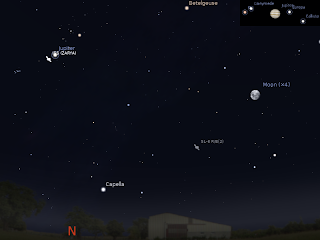 Evening sky looking North as seen from Adelaide at 21:41 pm local daylight saving time on Friday, January 25. The inset shows Jupiter's Moons at this time. At this time the ISS is quite close to Jupiter as seen from Adelaide. Similar views will be seen elsewhere at the equivalent local time (but without the ISS for more details of this week bright ISS passes see here).  Click to embiggen.


Jupiter is visible for most of the night, and is the brightest object in the evening sky. Despite opposition having just passed on the December the 3rd, Jupiter is prominent in the northern early evening sky, being quite visible in the twilight. Jupiter is below the Hyades, near the red star Aldebaran. Jupiter remains near Aldebaran during the week, making it look as if the Bull has two eyes. 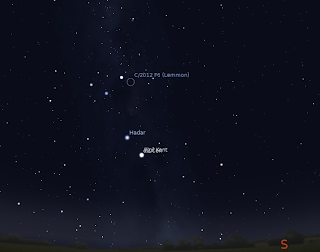 Comet C/2012 F6 Lemmon's location as seen from Adelaide at midnight AEDST on 26 January. Similar views will be seen elsewhere in Australia and New Zealand at equivalent local times.  (click to embiggen).

Comet  C/2012 F6 (Lemmon) is a nice little binocular comet, it is now leaving the Southern Cross, and will pass close to the Small Magellanic Cloud in February.It is brightening rapidly, and may be visible to the unaided eye in at the start of February. The brightening Moon makes it difficult to see though.

Bright ISS Passes Over Australia January 23-27, 2013
Daylight Jupiter 22 January 2013
Carnival of Space #285 is Here!
My Life as a Parrot Perch
Update on comet C/2012 F6 Lemmon
Down South
The Sky This Week - Thursday January 17 to Thursda...
Siding Spring Observatory Hit By Bushfires
Guided by the Light; Using the Moon to find the Br...
News Flash! Jupiters Orbit Tilited with Respect to...