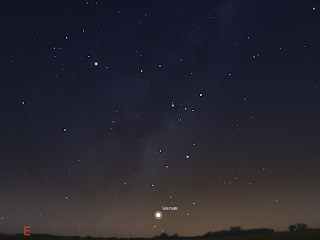 Morning sky on Saturday January 19 looking east as seen from Adelaide at 5:30 am local daylight saving time in South Australia. Similar views will be seen elsewhere at the equivalent local time (click to embiggen).

Venus spends the week in Sagittarius.


Saturn is now readily visible above the north-eastern horizon before dawn. Saturn climbs higher in the morning sky, becoming easier to see in the morning sky.  It should be high enough to be wothwhile in a small telescope. Saturn is in the constellation of Libra. 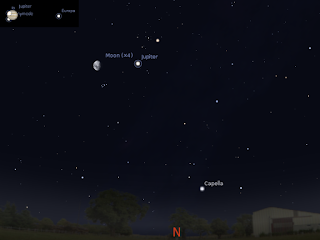 Evening sky looking North as seen from Adelaide at 22:00 pm local daylight saving time on Monday, January 20. The inset shows Jupiter's Moons at this time. Similar views will be seen elsewhere at the equivalent local time.  Click to embiggen.

Jupiter, Aldebaran and the white star Rigel in Orion form a long line in the sky. With the Pleiades cluster and the constellation of Orion close by, this is a beautiful sight. Jupiter visited by the Moon on the 21st and 22nd.

Jupiter is easily seen in the late evening sky, rising around 4:30 pm local daylight saving time and is highest in the north by 10:00 pm. Now is a perfect time to observe Jupiter with a telescope of any size in the evening. Jupiters' Moons are easily seen in binoculars, and can be followed from night to night changing position. On the evening of Monday January 21 at 10:00 pm local daylight savings time in the eastern and central states, Io has a shadow transit and Ganymede becomes occulted. 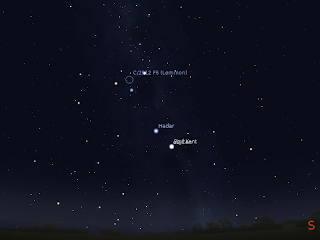 Comet C/2012 F6 Lemmon's location as seen from Adelaide at midnight AEDST on 20 January. Similar views will be seen elsewhere in Australia and New Zealand at equivalent local times.  (click to embiggen).

Comet  C/2012 F6 (Lemmon) is a nice little binocular comet, between the 18th and 22nd it passes through the Southern Cross, coming close to the clusters there.

Comments:
Hi Ian, I sent you another e-mail, I hope you don't mind. Thanks

Siding Spring Observatory Hit By Bushfires
Guided by the Light; Using the Moon to find the Br...
News Flash! Jupiters Orbit Tilited with Respect to...
Coming Events: A Year of Southern Astronomy for 2013
Comet C/2012 F6 Lemmon Passes Through the Heart of...
The iTelescope Siding Spring Observatory Facility ...
Asteroid Apophis, 9 January 2013
The Sky This Week - Thursday January 10 to Thursda...
Occultation of Spica by the Moon, 6 January 2013, ...
Carnival of Space #283 is here