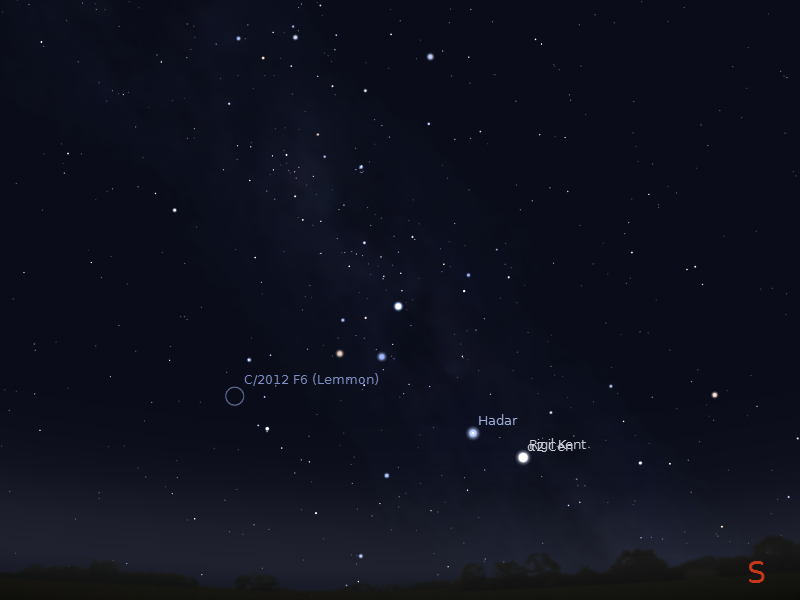 Comet C/2012 F6 Lemmon's location as seen from Adelaide at midnight AEDST on 11 January. Similar views will be seen elsewhere in Australia and New Zealand at equivalent local times.  (click to embiggen).

Comet C/2012 F6 Lemmon is quite bright at the moment, being much brighter than predicted.

It is currently magnitude 8 and will brighten over the remaining month to around magnitude 6.5. At magnitude 8 the comet will be tricky to observe in 10x50 or smaller binoculars  under light polluted suburban skies. But as the weeks go on it will become quite easy to see in binoculars as it brightens.

It is a reasonably easy target with a small telescope under most skies. Unfortunately, towards the end of the month the waxing Moon will make observing more difficult (Full Moon 27 January).

In February it will brighten up to magnitude 3, easily observable with the unaided eye. 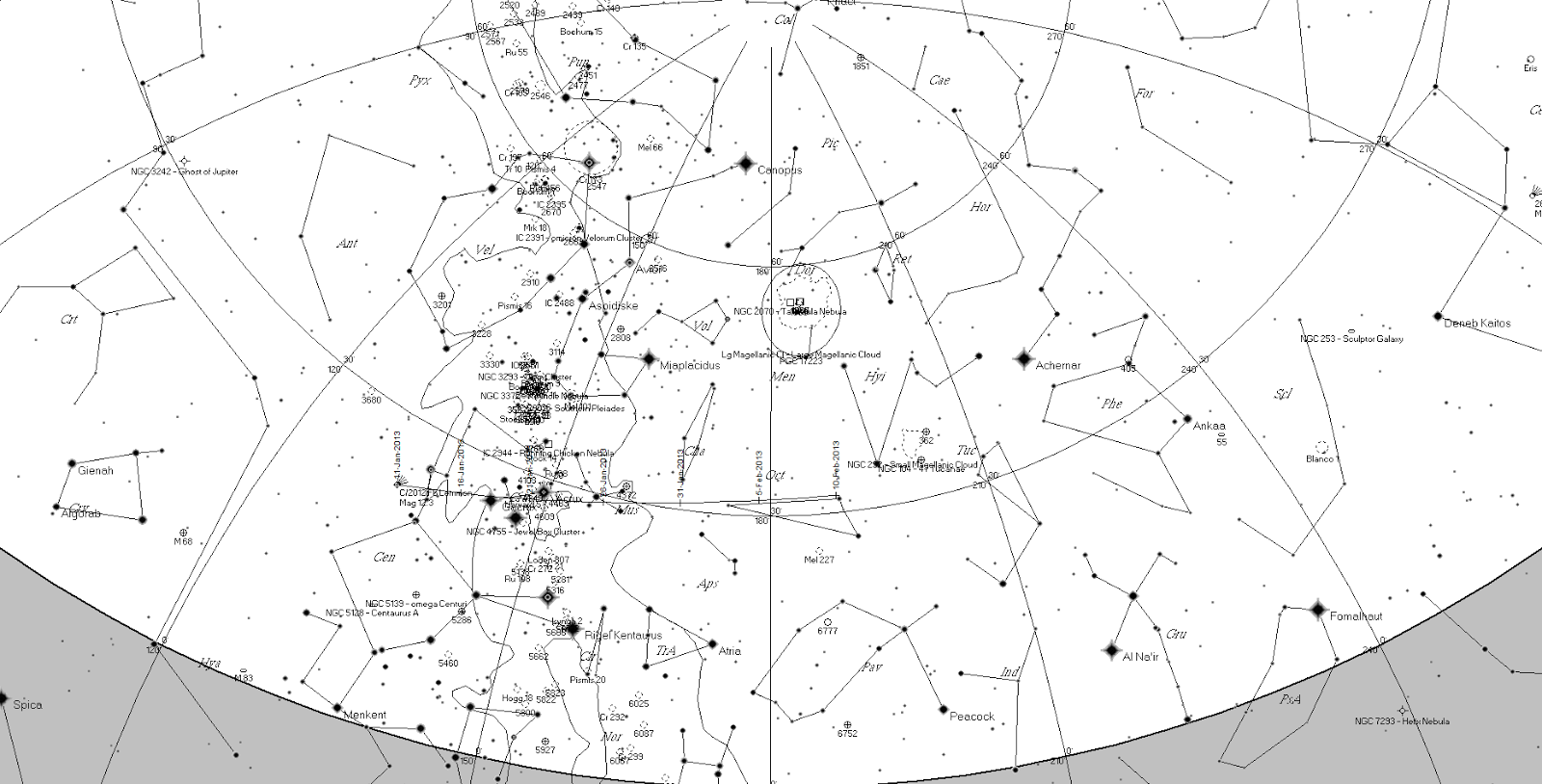 Printable black and white chart for locating comet C/2012 F6. It shows the location of the Southern Cross  and the comet at midnight. The middle of the chart is due south. Click to embiggen, then print the chart.

The comet is well placed for observation from around midnight, but the comet is highest early in the morning. It is in a rich area of the sky, and from the 16th the comet is within binocular distance many open clusters. Between the 18th and the 22nd the comet crosses the iconic constellation of Southern Cross and the star clusters that lie at the heart of this constellation.


Many of these are quite dim, and not observable in binoculars, but reasonably easy in even small telescopes. The brighter encounters are listed below (magnitudes in brackets). 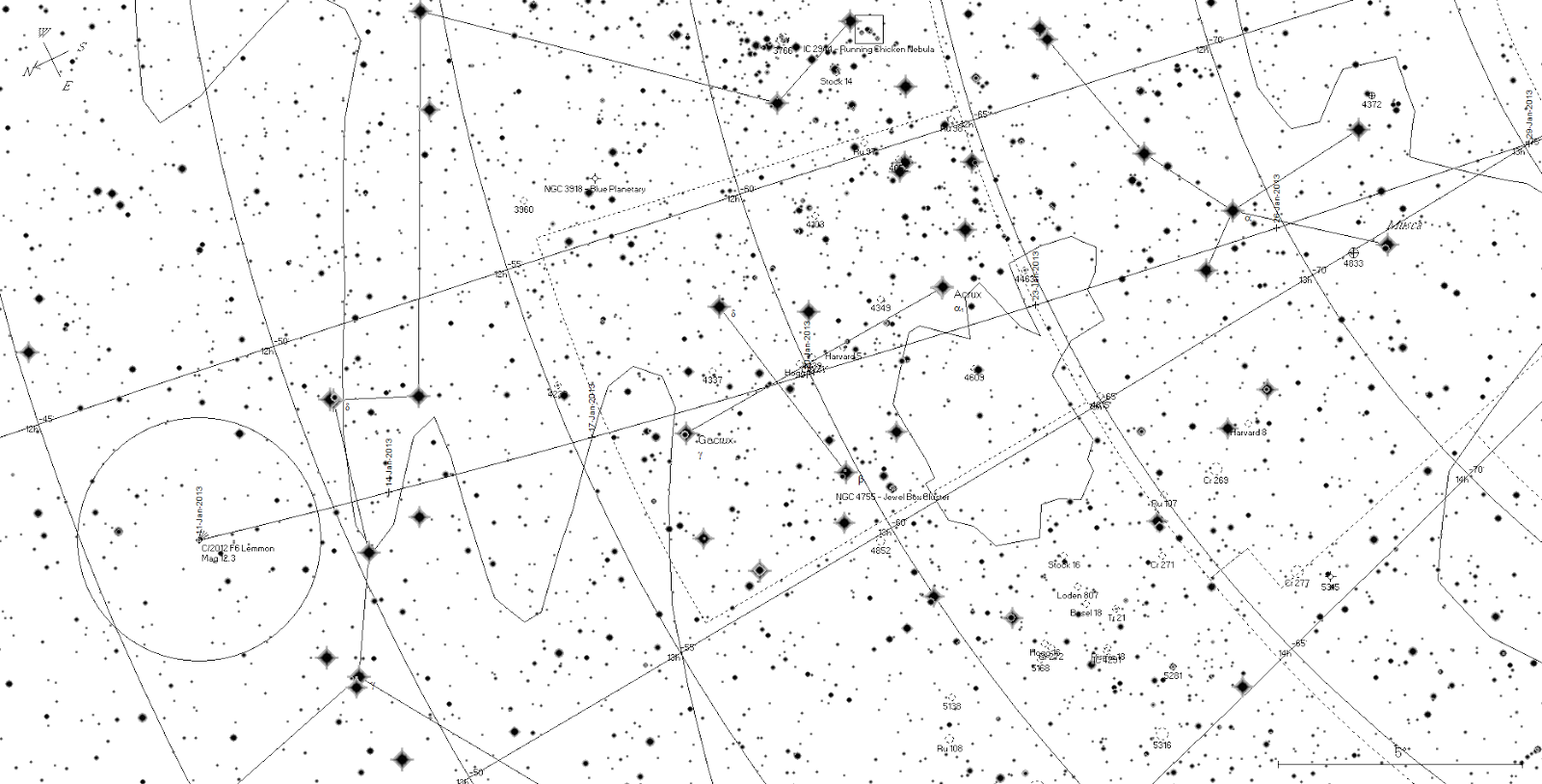 Printable black and white chart for locating comet C/2012 F6 in binoculars. Click to embiggen, then print the chart. The circle represents the field of view of 10 x 50 binoculars.

Locating the comet is reasonably easy with 10x50 binoculars, from the 11th to the 16th, sweep down along the axis of the Southern Cross, looking for a fuzzy star. At the moment the tail is small and dim. You may need to watch over a couple of nights to see it move and make sure it is not a star cluster. From the 18th to 22nd the brightening comet should be easy to  observe in the heart of the Cross.

In the later part of the month, when the Moon has set, even simple digital cameras with a timer function should be able to image the comet with 15 seconds or more exposure time (you will need a tripod).

While not spectacular, this will be a good comet, and a good opening act for the potentially spectacular comet 2011 L4 PANSTARRS in late February.