Now that Planet X hasn't surfaced, and the Mayan Apocalypse hasn't eventuated, the Doom Du Jour is Pole Shift. Apparently Earth's geographic pole and/or the poles of various other bodies such as Jupiter and Saturn is/are shifting/have shifted. Which is a Bad Thing (tm).

These contentions are supported by a variety of telescope and SOHO imager artefacts, and a poor understanding of what planets look like through a telescope.

A prime example is here. Now Dave Greg has dealt extensively with the telescope appearance imager artefact side of things (see here, here and here).

But there is one area where I feel the need for a bit more comment. The video says it will show you shocking evidence that Jupiter has moved from the ecliptic. The images above are a series of images from SOHO, where the position of Jupiter in the SOHO imager has changed. In the images above I've shown the same SOHO images as are in the video, and Jupiters position is different with respect to the central occulting disk. The fourth image is an overlya of the previous three to show the changes clearly.


"Why Hasn't Astronomy Pointed out Disturbed Orbits?" asks the video after the SOHO images.

Because the orbits aren't disturbed. Jupiter is exactly where we expect it to be, because Jupiter's orbit is not exactly on the plane of the ecliptic, but at an angle to it.


Jupiter's orbit is inclined to the plane of the ecliptci by one degree. This may not sound much, but it is twice the apparent diameter of the Sun (and Moon), thus in its orbit, Jupiter can move (from earth's perspective), substantially above and below the ecliptic. The black and white charts above (click to embiggen for a better view) shows the predicted position of Jupiter at the same dates as in the SOHO images as seem from Earth.

They are almost identical to that of SOHO, but aren't exactly the same as SOHO is in a halo orbit around Lagrange point 1, and has a slightly different point of view to that of Earth. Nonetheless, the charts show that the amount of movement we see in the SOHO images is what we expect of Jupiter's orbit.

Note that the software I am using is from 2005, using a 1989 model of the planets orbits, which has not been updated. Thus the agreement between the plotted positions and the observed positions is not due to post facto orbit tweaking. 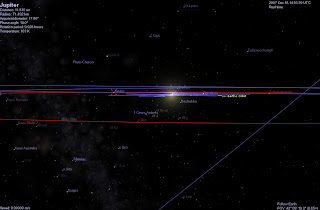 Planetary orbits have not been disturbed, the planets positions are exactly where we expect them to be. It is hard to tell if the posters of these claims, like the poster of the video we have been discussion, are merely deeply clueless about astronomy, or are deliberately trying to wind people up.

In the meantime, the next tie someone posts a video or claim that the planets orbits are disturbed, ask yourself "how would hundreds of thousands of amateur astronomers not notice this?" and contavt your local planetarium if you are worried.

Comments:
1/3rd of amateur telescope systems sold have GoTo systems on them (Source First Light Optics Plc if you want it)so if anything has changed it would have thrown all those systems way out. But alas, everything is where a mass market chinese manufactured telescope tells you it is so nothing anywhere it shouldn't be.

thanks Dave. WE slept outside last night and I was puzzled why Jupiter was so low in the sky - much lower than the sun had been the previous day! Asked Google this morning, found that ridiculous video then finally came up with the right question and found your explanation - a 1degree orbit tilt. Good old trigonometry. Hopefully will enjoy more nocturnal observations soon, happy that Jupiter is just where he should be.

Coming Events: A Year of Southern Astronomy for 2013
Comet C/2012 F6 Lemmon Passes Through the Heart of...
The iTelescope Siding Spring Observatory Facility ...
Asteroid Apophis, 9 January 2013
The Sky This Week - Thursday January 10 to Thursda...
Occultation of Spica by the Moon, 6 January 2013, ...
Carnival of Space #283 is here
Spica, the Moon and the International Space Station
International Space Station Shoots Jupiter, 4 Janu...
Bright ISS passes for the Next Few Days