The First Quarter Moon is Monday December 13. Mercury and Mars close Dec 13-14. Jupiter is easily seen in the evening sky and is close to the moon Dec 13. Venus visible together with Saturn and the bright star in the morning sky. Geminid meteor shower morning 14 and 15 Dec. Occultation of eta Piscium Dec 16. 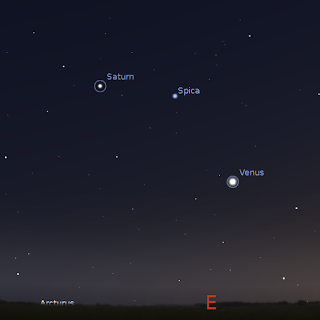 Morning sky looking east as seen from Adelaide at 5:00 am daylight saving time on Sunday December 12 showing Saturn, Venus and the bright star Spica. Similar views will be seen elsewhere at the equivalent local time. Click to embiggen.

Bright white Venus continues to rise above the eastern morning horizon and is now readily seen in the early morning sky. Venus, Saturn and the bright star Spica form a narrow triangle in the morning sky. Venus's crescent shape is easily seen in small telescopes. Venus will progressively decrease in size and wax towards "First quarter" over the coming weeks. 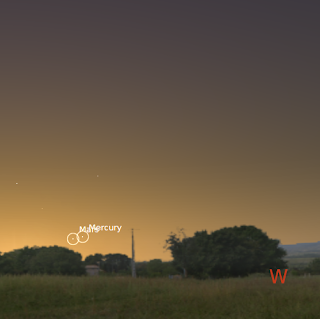 Mercury is lowering in the evening sky and will disappear in the twilight by the end of the week. On Monday December 13 and Tuesday December 14 Mercury and Mars are close. However, they will be difficult to see in the twilight, and you will need a clear, level horizon to have any chance at all.

Jupiter and Uranus come even closer together, and are readily seen together in binoculars. Uranus is the second brightest object within a binocular field north of Jupiter (now that 20 Piscium has entered the binocular field), and is in fact bright enough to be (just) seen with the unaided eye under dark sky conditions. A binocular spotters map is here.

The variable star Mira is visible to the unaided eye but fading. You can watch Mira fade over the coming week, before Moonlight interferes. 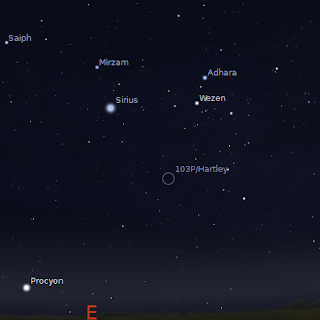 Comet 103P Hartley above the northern horizon at 10 pm ACDST (9 pm daylight saving time) as seen from Adelaide on December 12, similar views will be seen from other places at equivalent local time.

Comet 103P Hartley 2 continues to rise higher in the southern skies. It now rises well before midnight and is very high in the sky near Canis major and Sirius in the early morning.

The comet is fading, under dark skies binocular viewers will find it difficult to see the faint smudge near the open clusters M46 and 47.

By the end of the week it is no longer visible in binoculars.

Click the link for printable maps of comet 103P/Hartley. 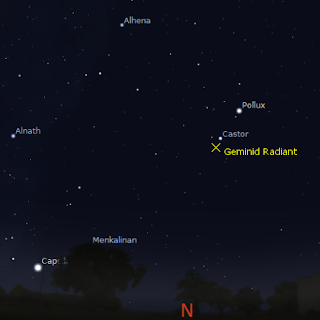 The radiant of the Geminid meteor shower above the northern horizon as seen from Adelaide at 3:00 pm ACDST, similar views will be seen from other sites at equivalent local times.

The Moon will have set by the time the Geminid radiant is high enough for decent meteor rates to be seen. In Australia we should see roughly a meteor every 3 minutes.