The New Moon is Monday December 6. Mercury meets the Moon Dec 7. Jupiter is easily seen in the evening sky. Venus visible together with Saturn and the crescent Moon in the morning sky. Comet 103P Hartley in amongst open clusters. The variable star Mira dims. 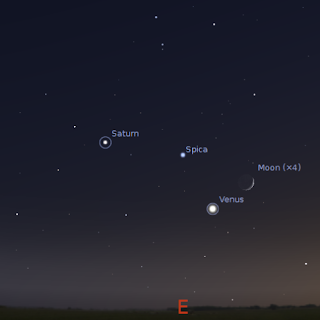 Morning sky looking east as seen from Adelaide at 5:00 am daylight saving time on Thursday December 3 showing Saturn, Venus and the crescent Moon . Similar views will be seen elsewhere at the equivalent local time. Click to embiggen.

The New Moon is Monday December 6.

Bright white Venus continues to rise above the eastern morning horizon and is now readily seen in the early morning sky. Venus, Saturn and the bright star Spica form a line in the morning sky and on Friday the 3rd the crescent Moon visits Venus. 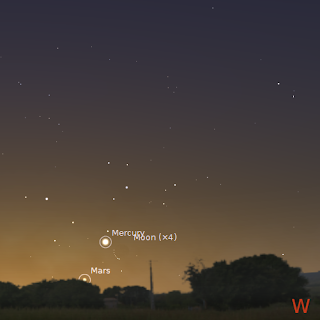 Mercury is climbing higher in the evening sky and now is reasonably easy to see in the late twilight. On Tuesday December 7 Mercury and the thin, day old crescent Moon are close.

Jupiter and Uranus are still close together and can be seen near each other in a pair of binoculars, although they are just in binocular range. Jupiter and Uranus come closer to each other this week. Uranus is the brightest object within a binocular field north of Jupiter, and is in fact bright enough to be (just) seen with the unaided eye under dark sky conditions. A binocular spotters map is here.

The variable star Mira is still bright. You can watch Mira fade over the coming week, before Moonlight interferes. 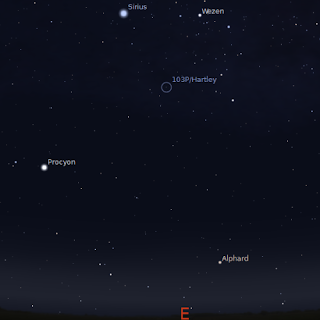 Comet 103P Hartley above the northern horizon at midnight ACDST (11 pm non-daylight saving time) as seen from Adelaide on December 5, similar views will be seen from other places at equivalent local time.

Comet 103P Hartley 2 continues to rise higher in the southern skies. It is very high in the sky near Canis major and Sirius. The comet is fading, and this is probably the last week it will be visible in binoculars.

The comet is rising earlier, and with the Moon close to new setting later this means you do not have to get up quite so early in the morning to see it (after midnight is better though when it is higher in the sky). This week the comet will remain in binocular range of a number of beautiful open clusters, including the delightful M47 and M46. This is best viewed with binoculars or a small telescope. Although the comet is reasonably bright, its diffuse nature means it will be a challenge to see in binoculars, except under very dark skies.