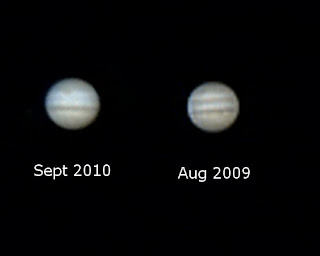 In case you didn't know, one of Jupiter's belts was missing. I didn't know until September, when I started imaging Jupiter again. I thought something was rather odd, the familiar double bands that I has seen for years was gone, replaced by a single band.

The image to the left contrasts the view through Don, my 8" Newtonian, on August 2009 and September 2010, at similar parts of it's opposition cycle (imaged with a Pillips ToUCam). As you can see the distinctive southern band is now a pale and anemic band (but it's now much easier to see the Great Red Spot).

We all know that Jupiter's atmosphere is very dynamic, but for an entire band to go is ridiculous! As it happens this event has occurred several times in the past. What astronomers thing is happening is that high white clouds of ammonia ice are forming above the darker band, obscuring it from view. Then, weeks to even years later, dark material erupts from below the cloud deck and the band reforms. This image is a composite of three color images taken on Nov. 18, 2010, by the Gemini North telescope in Hawaii. The composite image shows a belt that had previously vanished in Jupiter's atmosphere is now reappearing. Image credit: NASA/JPL/UH/NIRI/Gemin

Recent infrared and optical imaging shows material appearing above the ammonia clouds in the past few days, and it looks like Jupiter is getting it's southern equatorial belt back. So now is a good time for amateurs to watch our giant planet, as the reappearance of the belt should make for some interesting viewing (if the cloud ever clears for me, I'll be watching too).

Emily Lakdawalla has some great explanations and images, as well as animations, here. The Bad Astronomer has a good discussion as well.