Venus and the Moon through Clouds 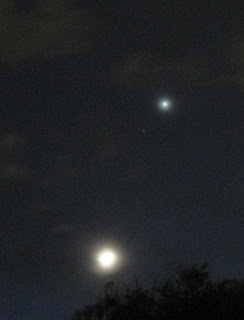 So this morning the lineup was hidden behind cloud. I could see the Moon shining feebly through though.

But I stood a moment watching. The clouds thinned and thickened, Venus appeared and disappeared, the whole was accompanied by smaller groups of cloud scudding rapidly across the sky, reddened by the still hidden Sun.

The whole thing was very beautiful, and I would have missed it if I had just said "Ugh, clouds"

(yes, Mars makes and appearacne in the image).

Comments:
For comparision, this was the view from Germany some hours later and at a very different latitude. Mars becomes better visible when embiggening the picture.

A Dark Adapted Eye
Venus, Mars and Mercury in the Morning
How to Know if Your Child Watches Too Much Dr. Who
Speaking of Things Crashing into the Moon
DIscovery of a Good Comet
Watching Things Crash on the Moon - Part II
Moon, Mars, Mercury and Venus in the Morning, June...
Carnival Of Space #107
What is the Moon REALLY Made Of?
Reminder: Science in the Cinema: Sunday June 14 2:...