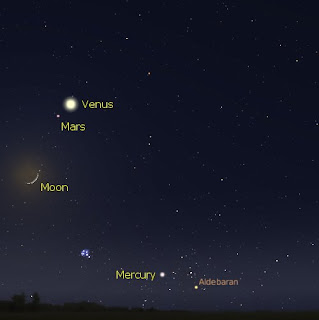 North-eastern horizon at 6:00 am local time as seen in Australia on 20 June.

As I've mentioned before, all bar one of the bright planets are in the morning sky. Dashed inconvenient for those of us who like our nice warm beds, but if you like getting up on crisp mornings, there is quite a sight for you to see.

Jupiter is glowing in the western sky, to the north is the waning Moon and to the east is Venus and Mars close together. Below that Mercury is between the Hyades and the Pleiades clusters.

Pretty nice, well worth the potential frostbite. You can even watch for satellites as well.