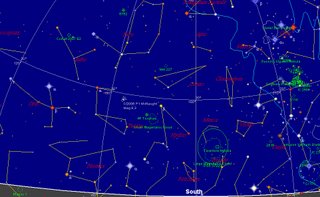 Star chart of the Southern skies at 5:50 am ACST showing Comet Lovejoy. Clock on the image to see a higher resolution image of the chart.

In these days of satellites and robot telescopes, it isn't often that an amateur finds a relatively bright comet. But Terry did it! He holds the distinction of being the first amateur to discover a comet using a digital camera (a Canon 350D). Interestingly he was also the first amateur to discover a comet via the internet. This is a fitting reward for the roughly 1000 hours of observing he has put in since 2004.

The comet is currently magnitude 9.5, out of the reach of standard binoculars, but easily within reach of tripod mounted big binoculars and small amateur instruments. We don't have an ephemeris yet, so we don't know if it will brighten or fade. Currently in Indus, the comet is roughly at right ascension 20h 42m 55s, declination -50o 43' 14". You have to get up early to look for it. It will be best to look between about 4:00 am and astronomical twilight.

The Australian is trying to drive me insane
Moon and Mercury in a Pool
March Jodcast out!
Comet McNaught Haikus
What is it with the Australian and Global Warming
The Brain Foundation Needs Your Help
An Interplanetary Pileup
Yay! Pi Day!
The Seas of Titan
Fantastic Mars Flyovers