Moon and Mercury in a Pool 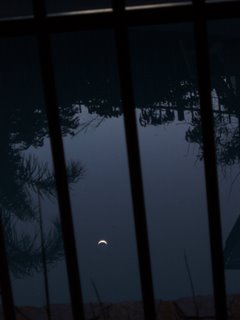 The Moon and Mercury reflected in a pool, you will have to click on this image to get a larger version so you can see Mercury. Mercury is above the Moon, near nare the upper palm frond in this reflection.

Eldest one was up early this morning, so I tried to show him Mercury, after a while he said "I can't see it, you just have eyes for seeing stars, dad". That cheered me up immensly.

A conventional image of the Moon and planets is below. 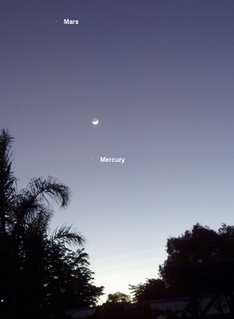 Mars, The Moon and Mercury in the morning. You will have to click on the image to get the larger version so you can see them clearly, but they are just visible on my monitor in the thumbnail.

Comments:
Beautiful snapshot of the reflection. I am unaccustomed to seeing a waning crescent Moon lit on the opposite side relative the horizon. Mercury is the speck above and to the left of the Moon?
peter

Yes, you are right. I've been trying to get reflections of the crescent Moon and Venus for ages, but to suceed with a refelction of the Moon and Mercury was unexpected.

On going to the nothern hemisphere, the thing about the sky that disturbed me most was the "upside down" Moon.

March Jodcast out!
Comet McNaught Haikus
What is it with the Australian and Global Warming
The Brain Foundation Needs Your Help
An Interplanetary Pileup
Yay! Pi Day!
The Seas of Titan
Fantastic Mars Flyovers
More practical astronomy experiments
The Moon and Mars in the Morning