The Seas of Titan 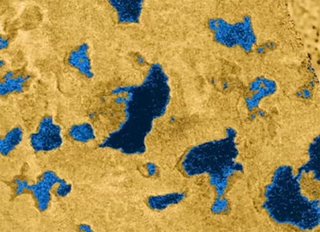 The latest flyby of Titan by Cassini has found seas on Titan. Well, big lakes really, but really big lakes.

Lakes are nothing new on Titan. But some of these are the size of the largest lakes on Earth, and one is bigger than the Aral Sea. Given that Titan is about the size of Mercury (about 2.5 times smaller than Earth), I suppose we can consider bodies of liquid larger than the Aral sea seas.

Providing they are bodies of liquid of course. Basically these are flat, smooth radar reflective areas. Normally that would mean liquid, but Titan is an alien world. If it is liquid, it will likely be a mixture of ethane and methane, not the best thing for a quick dip. There is also an animation that can be obtained at this page, but even the small one is 50 Mb!!!

Hey that was quick! The Wikipedia entry on Titan already has the lake images up!

Fantastic Mars Flyovers
More practical astronomy experiments
The Moon and Mars in the Morning
Sky and Space March/April edition out
If you go down to the beach today...
NightSky Survey, more Southern Hemisphere observat...
A Fantastic McNaught Gallery
Many happy returns PZ
Talk amongst yourselves (once more)
How many stars can you see? An International Survey