To be Expected Really 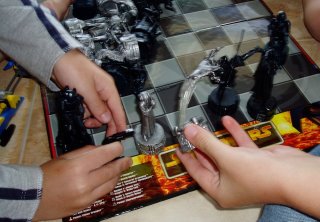 So, we got Eldest One a Star Wars(tm) chess set for his double digit birthday. The Melbourne Connection got him soccer goalies gloves, the Grandparents got him books. So he was in seventh heaven yesterday, and we played a lot of chess and soccer.

The sky was clouded out, so I couldn't show the rellies the comet last night. But I did hand my photos around. That at least covered part of my comet craving.

With a full house of rellies, including sister-in-law in the office, my posting is going to drop a bit over the week, and there is a huge amount of stuff to post about, the Pluto probe at Jupiter, a massive solar explosion the science of the comet and more readers images. I'll try and get some things up when I can.