Comet McNaught on the Beach 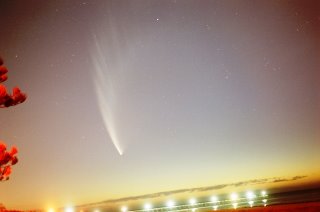 Comet McNaught taken over Larg's bay Pier, SA about 9.30 pm click the image to enlarge it, 10 sec exposure, ASA 400, F 2.0 Fugi film (compare with the shot taken around 9:20 pm using the digital with a nominal 6 secon exposure). The weird angle is due to the tripod mounting being skew.

So I got over excited and developed my film straight away. The detail in the comet is amazing, the forward spike is easily seen, as are the Synchrones (those striations in the tail). I'm very happy.

I've got some more shots tonight, I did a bit of playing around with exposures, and the sky was a bit clearer, it was easier to see the tail stretching uo past Grus the crane. But I'll wait a day or so to develop them, and get more shots tomorrow night hopefully.

I also have a backlog of readers images to post. I'll try and do that tomorrow.

Comments:
whew! what a wonderful comet! waiting for your next photos.

I live in North Aurora, IL and was going to get my newspaper on September 4, 2010 when I heard a whirring sound from the sky and looked up and saw what I think was a comet. It was flaming orange and round at the front with a tail and traveling horizontally extremely fast and I could hear it. Could you please tell me what I saw. It was approx. 5:55 in the morning. Thank you

Michele, what you saw was a fireball, an extremely bright meteorite.

Thank you for identifying the object I saw. I could not believe how close it appeared and that I could actually hear it before I saw it. Is this something that appears very often. I an extremely interested and can't believe no one else saw it. It was spectacular. Michele Donovan, North Aurora, IL

Thank you so much for the identity of the object that I saw in the sky on Sat. Sept. 4th. It was spectacular

Thank you so much Ian for the identity of the object that I spotted in the sky early in the morning on Sat. Sept. 4th in North Aurora, IL. It was spectacular and I was so surprised that I actually heard it before I spotted it. Is this something that happens frequently and I wonder why no one else spotted it. If you could share any other info. I would appreciate it. Michele Donovan