The Full Moon is Thursday December 12. 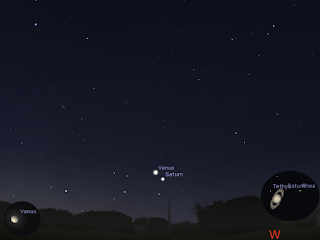 Sky at 21:28 ACDST on Wednesday December 12 (60 minutes after sunset) looking west as seen from Adelaide. Venus and Saturn are at their closest. 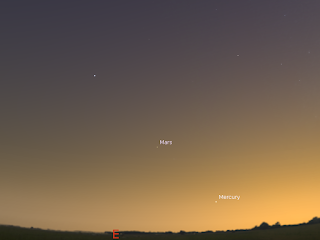 Morning sky at 5:28 ACDST facing east as seen from Adelaide on Saturday 7 December 30 minutes before sunrise.

Mars is low above the horizon below Spica and above Mercury. You may need binoculars to see Mercury. 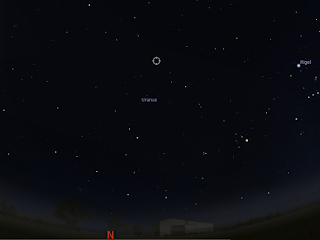 Cetus looking north-west at 22:04 pm ACDST on Saturday 7 December (90 minutes after sunset), Mira is indicated by the circle.

Mira (omicron ceti), a star in the constellation of Cetus the whale, is a long period pulsating red giant and changes brightness from below naked eye visibility to a peak of round magnitude 2 (roughly as bright as beta Crucis in the Southern Cross) in around 330 days.

Mira was predicted to peak with maximum of 3.4 around 24 October. However, many observers are still reporting it as bright(ish). Mira may be seen above the northern horizon from around 90 minutes after sunset. Mira is currently visible to the unaided eye and may noticeably fade over December. Similar views will be seen elsewhere in Australia 90 minutes after sunset, click to embiggen.


Venus is higher above the western horizon in the late evening twilight. Venus is now readily seen up to 90 minutes after sunset.Venus comes closer to Saturn over the week as it leaves Jupiter behind.Venus and Saturn are at their closest on the 11th.

Jupiter   is still visible low in the western twilight below Venus. Jupiter sets around 60 minutes after sunset. This is the last week to easily see Jupiter before it disapears in the twilight glow.

Mars is visible in the morning twilight  above Mercury

Saturn  is above Jupiter and Venus and near the "handle" of the "teapot of Sagittarius. Venus comes closer to Saturn over the week and the pair are at their closest on the 11th.