The Sky This Week - Thursday October 31 to Thursday November 7

The First Quarter Moon is Monday November 4.  The Moon is at apogee, when it is furthest from the Earth, on the 7th. 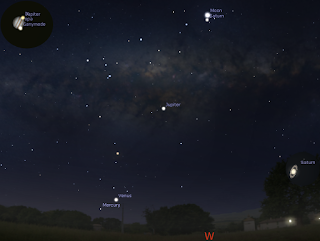 The crescent Moon is very close to Saturn.

The left upper insert shows the telescopic view of Jupiter at 20:54, Ganymede is above to exit the disk of Jupiter and Io about to cross it. The lower right is that of Saturn at the same magnification. 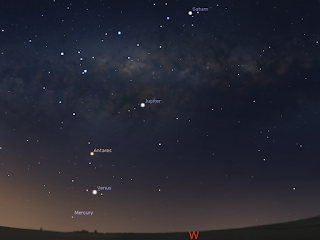 Sky at 20:40 ACDST on Monday 4 November (60 minutes after sunset) looking west as seen from Adelaide. Jupiter is above the western
Mercury is low above the western horizon and is well below Venus.

Venus is between beta and delta Scorpii 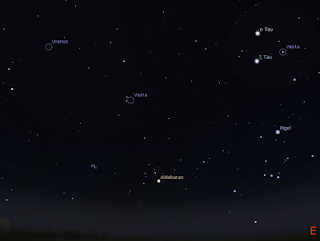 The North-east horizon as seen in Adelaide at 11 pm local daylight saving time (10:00 pm non-daylight saving time) showing the location of Vesta (click to embiggen) on Saturday 2 November. The inset is the binocular view of Vesta and the two prominent guide stars.

while not the largest asteroid, Vest occasionally becomes bright enough to see with the unaided eye, but is now easily visible in binoculars. Vest is currently easy to find, near the two brightish stars that form the foreleg of Taurus the bull.


Similar views will be seen elsewhere in Australia at the equivalent local time, click to embiggen. A spotter guide with printable charts is here.

Venus is higher above the western horizon in the late evening twilight. Venus is now readily seen over 60 minutes after sunset.Venus passes between the bright stars beta and delta Scorpii on the 4th

Mercury is low above the western horizon in the late evening twilight and  is sinking rapidly towards the horizon.

Jupiter is now well past opposition. However, it is still well worth observing in the early evening. Jupiter is easily visible in the western sky  and is located beside the distinctive constellation of Scorpius and not far from the bright red star Antares. It sets around 11:00 local time and is a good telescope target in the early evening.

Saturn  is to the east of Jupiter and near the "handle" of the "teapot of Sagittarius. It is best for telescopic viewing from just around astronomical twilight local time until the early morning.On the 2nd the crescent Moon is close to Saturn and the may may be seen together in wide field telescope lenses.