The Full Moon is Tuesday November 12. 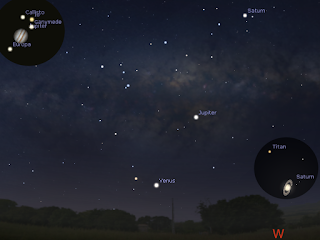 Sky at 20:53 ACDST on Sunday 10 November (60 minutes after sunset) looking west as seen from Adelaide. Venus, Jupiter and Saturn form a line above the western horizon.

The left upper insert shows the telescopic view of Jupiter at 20:53 on 9 November. The lower right is that of Saturn on the 10th at the same magnification. 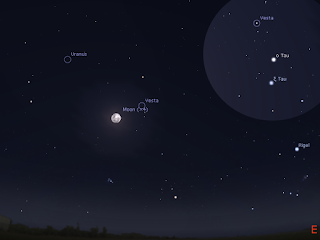 The North-east horizon as seen in Adelaide at 10 pm local daylight saving time (9:00 pm non-daylight saving time) showing the location of Vesta (click to embiggen) on Tuesday 12 November when it is at opposition. The inset is the binocular view of Vesta and the two prominent guide stars.

Similar views will be seen elsewhere in Australia at the equivalent local time, click to embiggen. A spotter guide with printable charts is here. 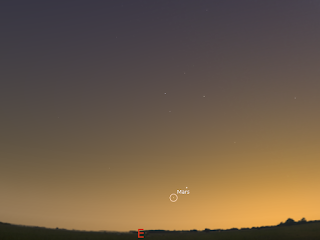 Morning sky at 5:39 ACDST facing east as seen from Adelaide on Saturday 9 November 30 minutes before sunrise.

Venus is higher above the western horizon in the late evening twilight. Venus is now readily seen over 60 minutes after sunset.Venus passes close to the bright Star Antares on the 10th.

Mercury is lost in the twilight. Mercury transits the Sun's disk on the 12th, but this will not be seen from Australia (but will from North Island New Zealand).

Jupiter  is still well worth observing in the early evening. Jupiter is easily visible in the western sky  and is located beside the distinctive constellation of Scorpius and above Venus. It sets around 11:00 local time and is a good telescope target in the early evening.

Saturn  is to the east of Jupiter and near the "handle" of the "teapot of Sagittarius. It is best for telescopic viewing from just around astronomical twilight local time until around 11 pm.