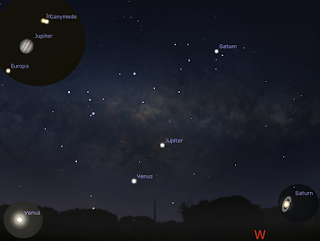 Sky at 21:01 ACDST on Saturday 16 November (60 minutes after sunset) looking west as seen from Adelaide. Venus, Jupiter and Saturn form a line above the western horizon. 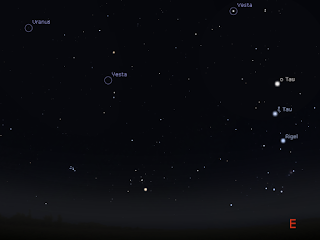 The North-east horizon as seen in Adelaide at 21:37 pm ACDST (90 minutes after sunset) showing the location of Vesta (click to embiggen) on Saturday 16 November. The inset is the binocular view of Vesta and the two prominent guide stars.

Similar views will be seen elsewhere in Australia 90 minutes after sunset, click to embiggen. A spotter guide with printable charts is here. 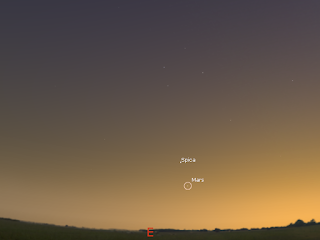 Morning sky at 5:34 ACDST facing east as seen from Adelaide on Saturday 16 November 30 minutes before sunrise. 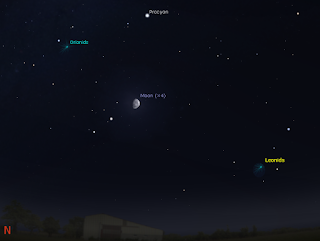 Morning sky facing north-east from Adelaide at 4:00 am ACDST on 18 November, the Leonid radiant is indicated with a star burst. Similar views will be seen elsewhere in Australia at the equivalent local time.

For this years Leonids the Last Quarter Moon will result in poor viewing conditions. As for the recent past years this year there are low rates, you will be unlikely to see anything substantial (although there may be short bursts of higher rates). The best time to observe in Australia is the morning of the 18th between 3 and 4 am (daylight saving time). The Radiant (where the meteors appear to come from) is in the Sickle of Leo. Orion and the Hyades will be visible. So it will be a quite nice morning, even if there are only a few meteors.

Venus is higher above the western horizon in the late evening twilight. Venus is now readily seen up to 90 minutes after sunset.Venus comes closer to Jupiter over the week.

Jupiter  is still worth observing in the early evening. Jupiter is easily visible in the western sky  and is located beside the distinctive constellation of Scorpius and above Venus. It sets around 10:30 local time and is a good telescope target in the early evening. Venus comes closer to Jupiter over the week.

Saturn  is to the east of Jupiter and near the "handle" of the "teapot of Sagittarius. It is best for telescopic viewing from just around astronomical twilight local time until around 10:30 pm.