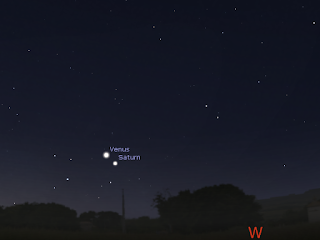 Mercury is low in the morning sky this month.

Venus climbs higher in the evening twilight and meets Saturn on 11 December.

Mars climbs higher in the morning sky and is visited by the crescent Moon on the 23rd.

Jupiter is low in the western evening sky and is lost by mid month.

Saturn  is low above the western horizon, it meets Venus on the 11th and is lost to view by the end of the Month.