The Sky This Week - ThursdaySeptember 19 to Thursday September 26

The Last Quarter Moon is Sunday September  22.  Earth is at spring equinox on the 23rd. Jupiter is easily visible as the brightest object in the north-western evening skies. Saturn is near Jupiter, is high in the evening skies.Venus and Mercury climb higher in the evening twilight.

The Last Quarter Moon is Sunday September  22.  Earth is at spring equinox on the 23rd, at this time the sun rises due east and sets due west and day and night are equal length. Get ready for Adelaide and Melbourne Henge. 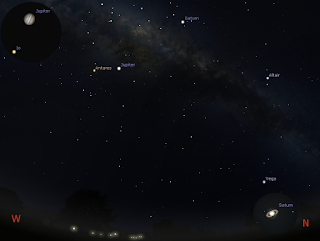 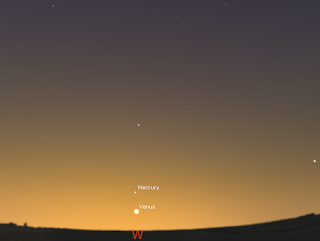 The western horizon at 18:36 ACST on Saturday, 21 September (30 minutes after sunset) as seen from Adelaide. Mercury and Venus are just above the horizon and you will need a flat, clear horizon such as the desert or ocean to see them.

You may also need binoculars to pick out Mercury, it may become clearer if you wait 5 -10 minutes more for the sky to darken.

Earth is at spring equinox on the 23rd, at this time the sun rises due east and sets due west and day and night are equal length. Many Australian cities are oriented on an "east west" grid, so theoretically we should be able to see the sunset down these major east-west road with the city scape forming a henge like canyon. However, our street are only approximately east west, the Adelaide city CBD streets are aligned to 263 degrees west, so the "henge" effect won't be seen until 6 October. For Melbourne the streets are aligned 250 degrees west, and their henge, best seen from the steps of Parliament  of Spring Street, is on 3-4 November. This gives you a bit of time to prepare. Do the streets of your town align east west? why not find if you will have a "city Henge" effect.

Venus is low above the western horizon in the evening twilight. You will need a level clear horizon like the desert or ocean to see it.binoculars to see it

Mercury is low above the western horizon in the evening twilight. You may need binoculars to see it initially in the twilight glow.

Jupiter is now well past opposition. However, it is still well worth observing. Jupiter is easily visible as the brightest object in the north-western/western sky (aside from the Moon) and is located just below the distinctive constellation of Scorpius and the bright red star Antares. It is visible all evening long and is a good telescope target in the evening, being highest above the northern horizon around 5:30 pm local time.

Saturn was at opposition on July 10th, when it was visible all night long. Saturn is to the east of Jupiter and just below the "handle" of the "teapot of Sagittarius. It is best for telescopic viewing from just around astronomical twilight local time until the early morning and is highest above the northern horizon when it is ideal for telescopic imaging, around 7:30 pm local time.