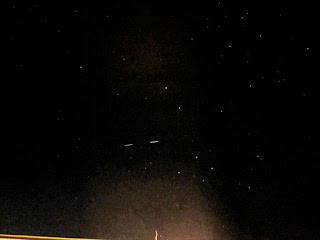 Tonight's ISS pass. The ISS passed between the Pointers and the Southern Cross, a lovely bright pass un-bothered by the clouds that had been lurking around during the day. Sadly the back veranda light interfered. Click to embiggen.

However it is cautionary tale about not trying to image while cooking diner. I had set the camera up beforehand, and in rushing out to image the pass accidentally reset everything.

Trying to reset it as the ISS approached I ended up only getting 3 images before the ISS entered Earth's shadow. Still I saw it, and it was very nice even if I was struggling with my camera most of the time. There are still more good passes to come.