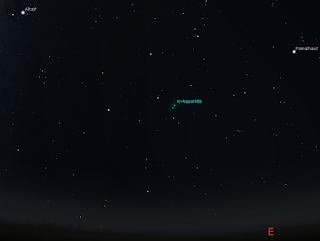 Just a reminder that the eta Aquarid meteor shower peaks on the late evening/early morning of  6-7 May in Australia, although better rates will be seen on the mornings of the 7th, 8th and 9th.


There has been some confusing about the actual peak, ads the International Meteor organisations  calendar website says 5-6, while their PDF calendar says peaking on May 6 14:00 UT, and their viewing website says May 7.

For the purposes of of viewing I will take the PDF calendars reported peak on May 6 14:00 UT, which is  (just) May 7 in eastern Australia as the real peak.  As the meteor radiant does not rise until around 2 am, and is not at a reasonable hight until 3:30 am for Australians our best viewing times are in the mornings after the actual peak.

However, the peak is really broad and viewing from the 6-9 will give you decent rates (see table below). Based on the NASA meteor flux program (see below) and my own excel spreadsheet using the Jennisken's eta Aquarid stream parameters the best rates will be seen from Australia on the mornings of the 8th and 9th (see table below, but the 7th is very worth while too, fiddling with the parameters a bit gives 7th 8th as the best but as you can see the rate difference between the nights is marginal).

Although as I said above the actual peak is on 6-7th, for Australia the best time to see the eta-Aquarids is in the early morning of the 7th, 8th and 9th, with the best rates between around 4-5 am (see table below).

Don't look directly at the radiant site, because the meteors will often start their "burn" some distance from it, but around a hand-span up or to the side. The best way to watch the Eta Aquariids is to let your eye rove around the entire patch of the sky above the north-east horizon, between the only two obvious bright stars in the north-east, Altair and Fomalhaut. 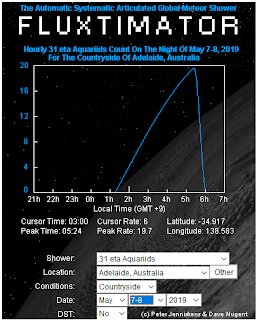