The New Moon is Friday April 5. Daylight saving ends on the morning of the7th. Mars is visible low in the evening skies and is close to the Pleiades cluster. The crescent Moon is close to Mars on the 9th. Jupiter is low in the late evening skies. The morning skies feature four bright planets Jupiter, Saturn, bright Venus and Mercury. Venus and Mercury come closer over the week.

The New Moon is Friday April 5. 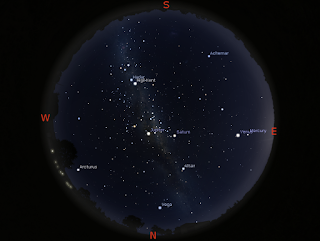 Morning  sky on Sunday, April 7 showing the whole sky as  seen from Adelaide at 56:37 ACDST (60 minutes before sunrise). Four bright planets can be seen. Jupiter and Saturn are high above the northern horizon. Venus and Mercury are above the eastern horizon. 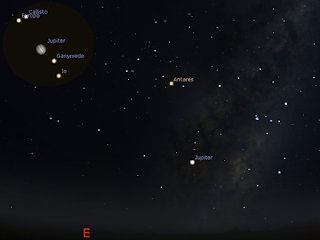 Sky at midnight on Saturday, April 6 looking east as seen from Adelaide. Jupiter is low above the eastern horizon. The left upper insert inset shows the telescopic view of Jupiter at this time

Similar views will be seen elsewhere in Australia at the equivalent local time . 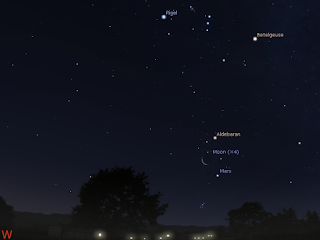 Evening sky on Tuesday, April 9 as seen looking north-west from Adelaide at 18:55 ACST (60 minutes after sunset). Mars is the brightest object above the western horizon just below the crescent Moon.

The Pleiades and Hyades also grace the north-western sky. Mars is still close to the Pleiades at the beginning the week then moves closer to the Hyades.

Venus is bright in the morning skies below Jupiter and Saturn and above Mercury. Mercury moves closer to Venus over the week.

Mercury  climbs higher in the morning sky and is visible below Venus.

Jupiter  Jupiter is now rising just before midnight in the evening sky, but is low to the horizon and not a good telescope target until the morning.

Mars moves through Taurus and is the brightest object in low in the western evening sky. Mars sets around 8:00pm. Mars is still close to the Pleiades at the beginning the week then moves closer to the Hyades. Mars is close to the crescent Moon on the 9th.


Saturn is climbs higher in the morning sky.In is in an excellent position for telescopic viewing in the early morning.