The New Moon is Thursday, March 7 and the First Quarter Moon is Thursday, March 14. Mars is visible low in the evening skies and is visited by the crescent Moon on the 11th.  Jupiter is high in the morning skies above Saturn and bright Venus. There will be a series of bright passes of the International Space Station visible around or during the weekend in the early evening. 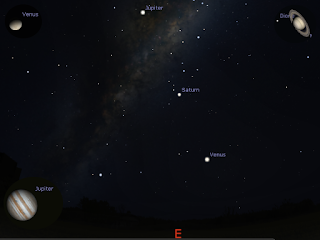 Morning  sky on Saturday, March 9 looking east as seen from Adelaide at 5:39 ACDST (90 minutes before sunrise). Jupiter is high in the morning sky above the pair of Venus and Saturn. The left upper insert inset shows the telescopic view of Venus at this time. the lower left insert shows the telescopic view of Jupiter at the same scale and the upper right that of Saturn. 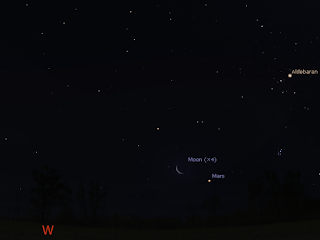 Evening sky on Monday, March 11 as seen looking north-west from Adelaide at 21:15 ACDST (90 minutes after sunset). Mars is the brightest object above the western horizon. The crescent Moon is close to Mars

The beginning of the week is is  a good time to observe our wonderful southern sky with the Moon out of the way. Looking at the wonderful clusters and nebula of our southern skies with the unaided eye or binoculars will be a treat. The Moon interference is minimal during the weekend, so this is a good viewing time too. 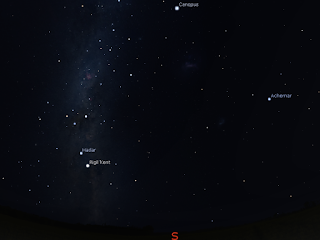 Evening sky on Saturday, March 11 as seen looking South from Adelaide at 21:15 ACDST (90 minutes after sunset).

The Milky way stretches from the Southern cross (Wilto the Eagle to the people of the Adelaide Plains) in the south to the distinctive constellation of Orion and beyond. The Milky ways' satellite dwarf galaxies, the Magellanic clouds, (between and below the bright stars Canopus and Achernar) are easily seen away from the city lights. The large Magellanic cloud is the smudge directly below Canopus and at its highest, making an excellent binocular target. 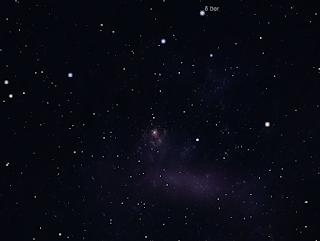 The approximate 10x50 binocular view of the area around the Large Magellanic Cloud on Saturday, March 11 as seen  at 21:15 ACDST (90 minutes after sunset).

. The Tarantula nebula cane be seen at the top of the LMC. 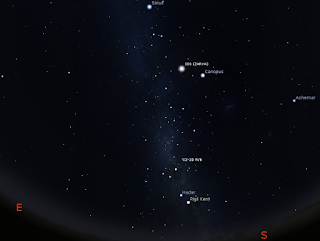 The ISS passes close to  Canopus, as seen from Adelaide on the  evening of Saturday 9 March at 20:59 AEDST. Simulated in Stellarium (the ISS will actually be a bright dot), click to embiggen.

From around the 8th-13 of March there are a series of bright ISS passes coming close to various bright stars which should be seen from most of Australia.  When and what you will see is VERY location dependent, so you need to use either Heavens Above or CalSky to get site specific predictions for your location, but there should be lots of good ISS viewing for most of Australia.


Venus is bright in the morning skies below Jupiter and Saturn.

Mercury  is lost in the twilight but will return to the morning sky later in the month.

Mars is in Pisces and is readily seen as the brightest object in the western evening sky. Mars sets around 10:30pm and is visited by the crescent Moon of the 11th.