The First Quarter Moon is Thursday, March 14 and the Full Moon Thursday 21 March. This Full Moon is also technically a perigee "Supermoon", but not as good as February's Perigee Moon. The Earth is at Autumnal Equinox on the 21st. Mars is visible low in the evening skies and is coming closer the the Pleiades cluster.  Jupiter is high in the morning skies above Saturn and bright Venus.

The First Quarter Moon is Thursday, March 14 and the Full Moon Thursday 21 March, The Moon is at Perigee, when it is closest to the Earth, on the 20th. The Earth is at Autumnal Equinox on the 21st. Day and night are of equal length and the Sun rises due East and Sets due west. 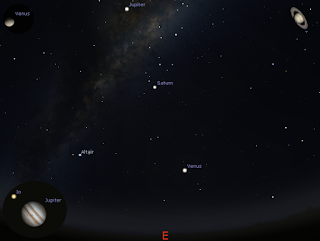 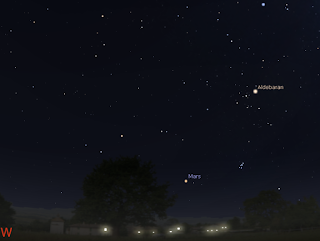 Evening sky on Saturday, March 16 as seen looking north-west from Adelaide at 20:58 ACDST (90 minutes after sunset). Mars is the brightest object above the western horizon.

The Pleiades and Hyades also grace the north-western sky. Mars comes closer to the Pleiades over the week.

Venus is bright in the morning skies below Jupiter and Saturn.

Mercury  is lost in the twilight but will return to the morning sky later in the month.

Jupiter  climbs higher in the morning sky. Jupiter is now rising just before midnight in the evening sky, but is too low to see without a level, unobstructed horizon.

Mars is in Aries and is the brightest object in low in the western evening sky. Mars sets around 10:00pm. Mars will come closer to the beautiful Pleiades cluster over the week.

Saturn is climbs higher in the morning sky.