The Last Quarter Moon is Saturday April 27. The Moon is at apogee, when it is furthest from the Earth, on the 29th. 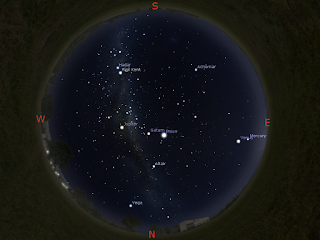 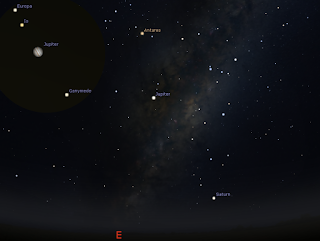 Sky at 23:00 ACST on Saturday, April 27  looking east as seen from Adelaide. Jupiter is low above the eastern horizon. The left upper insert inset shows the telescopic view of Jupiter at this time. 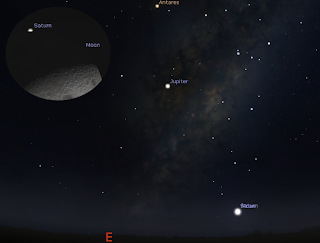 The view of the Moon facing east at 22:48 am ACST in Adelaide on Thursday 25 April just as Saturn appears from behind the Moon. The Moon is close to the horizon. 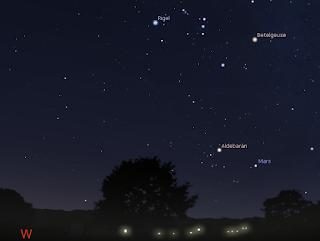 Evening sky on Saturday, April 27  as seen looking north-west from Adelaide at 18:50 ACST (60 minutes after sunset). Mars is the brightest object above the western horizon

The Hyades also grace the north-western sky. Mars is between the bright red star Aldebaran and the star Alnath which marks the tip of the Bull's horns. 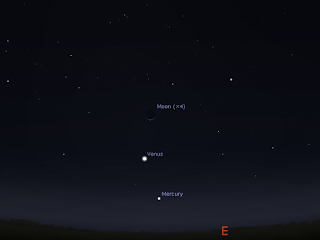 Morning  sky on Thursday, May 2 looking east as seen from Adelaide at 5:56 ACDST (60 minutes before sunrise). Venus and Mercury are close with the thin Crescent Moon above Venus, making an attractive line-up.

Venus is still bright in the morning skies below Jupiter and Saturn and above Mercury. Mercury away from Venus over the week. The thin crescent Moon is above Venus on May the 2nd.

Jupiter  Jupiter is now rising just before midnight in the evening sky, but is low to the horizon and not an ideal telescope target being still at its best in the morning.

Saturn  has entered the evening sky but it still best for telescopic viewing in the early morning. On the evening of the 25th the Moon occults Saturn as seen from eastern and parts of central Australia.