The Full Moon is Sunday, December 23.  Mars is visible low in the evening skies.  Venus is bright in the morning sky with Mercury  and Jupiter below. Jupiter and Mercury close on the 22nd. Earth is at solstice on the 22nd. Comet 46P is lost below the horizon.

The Full Moon is Sunday, December 23.  The Moon is at Perigee, where it is closet to Earth on the 24th. Earth is at Solstice on the 22nd, where the day is longest. 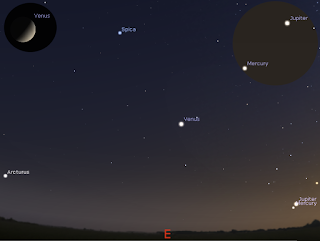 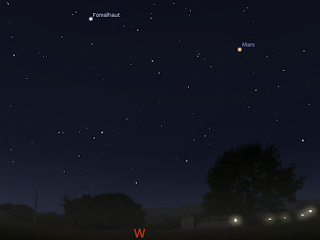 Evening sky on Saturday, December 22 as seen looking west from Adelaide at 22:16 ACDST (90 minutes after sunset). Mars is the brightest object above the western horizon. 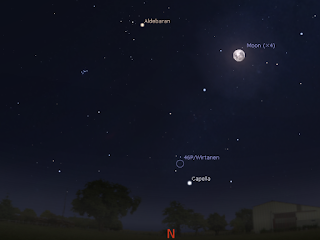 Early morning sky on Sunday, December 23 as seen looking north from Adelaide at 00:10 ACDST (shortly after midnight when the comet is highest).  The location of comet 46P  is shown.

Comet 46P is has passed it peak brightness and is now fading. With the bright Moon interfering it is hard to say how bright it is but magnitude 4.5 is probably in the ball park. Over the next few days the proximity of the bright Moon makes the comet quite hard to see. But after the weekend it should be seen as a fuzzy blob in binoculars if you have a clear, unobstructed northern horizon.

On the 23rd the comet in in the centre of a distinctive triangular asterism, on the 24th it is next to the bright star Capella, but the stars brightness may overwhelm it. On the 25th (Christmas day) it is just below Capella. After this in Southern Australia it will be too close to the horizon for good viewing, although in Northern Australia it may be visible until early January.  More details on how to see it, along with charts suitable for printing, are here.

Mercury  is low in the morning twilight with Jupiter rising to meet it.

Jupiter  climbs higher in the morning twilight and is closet to Mercury on the 22nd.

Comments:
I'm north of brisbane and heard a 'pop'bang and the whole sky flashed bright, I had my back to it but a friend said white. It wasn't lightning. Have you heard/seen anything or know what it could have been?