The Sky This Week - Thursday November 30 to Thursday December 7

The Full Moon is Monday, December 4. This is a perigee ("super") Moon. On the 3rd the nearly full Moon is in the head of Taurus the Bull.  Mercury and Saturn sink into the twilight.  Jupiter is now prominent in the morning sky and is heading towards the bright star alpha2 Librae. Mars is relatively easy to see and starts the week close to the bright Spica but soon leaves it behind as it heads towards Jupiter.

The Full Moon is Monday, December 4. This is a perigee ("super") Moon. As the Moon is closest to the Earth it is bigger and brighter than normal Full Moons, however as it will be only be around 14% larger and 30% brighter than an apogee Full Moon, you will probably need a telescope and photographic evidence to see the difference. For more detail and photography links see my Super Moon page. 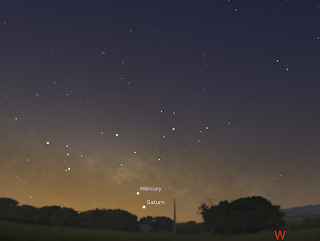 Evening sky on Saturday December 2 looking west as seen from Adelaide at 21:00 ACDST  (45 minutes after sunset). Mercury is low above the horizon and is close to  Saturn.

Saturn is visible low in the early evening twilight near Mercury and will be effectively lost to view by the end of the week. 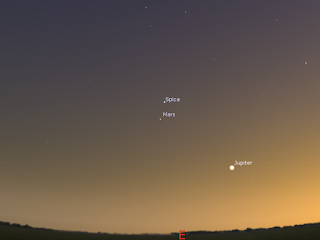 Morning sky on  Saturday December 2 looking east as seen from Adelaide at 5:26 ACDST (30 minutes before sunrise). Venus is lost in the twilight. Jupiter is prominent and Mars can be seen close to the bright star Spica. 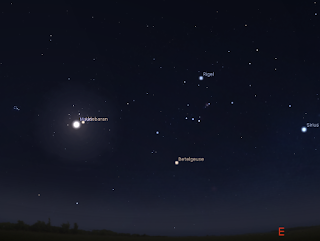 Evening sky on Saturday December 2 looking east as seen from Adelaide at 22:00 ACDST. The Moon is in the head of Taurus the Bull. Similar views will be seen elsewhere at equivalent local times. (click to embiggen)