The New Moon is Saturday, November 18.  Mercury climbs higher in the evening twilight and forms a line with Antares and Saturn low in the early evening sky.  On the 20th Mercury, Saturn and the crescent Moon make a triangle, on the 21st The Moon, Saturn, Mercury and Antares form a line. Venus is now very low in  the morning twilight. Venus, Jupiter and the thin crescent Moon are very close on the on the 18th.  Leonid meteor shower peaks this week.

The New Moon is Saturday, November 18. The Moon is at apogee, when it is furthest from the Earth, on the 22nd. 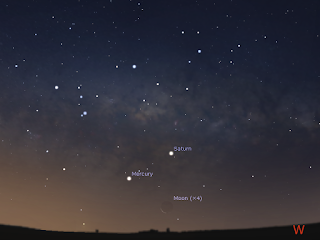 Evening sky on Monday November 20 looking north-west as seen from Adelaide at 21:06 ACDST  (60 minutes after sunset). Mercury is low above the horizon and forms a triangle with with Saturn and the thin crescent Moon.

Mercury is visible in early evening and is above the western horizon in the late twilight. Mercury is becoming more prominent, and is well worth watching as it rises into the evening sky up the body of the Scorpion. This week it forms a line with bright star Antares in the body of the scorpion and Saturn. On the 20th Mercury, Saturn and the crescent Moon make a triangle, on the 21st The Moon, Saturn, Mercury and Antares form a line.. Mercury is visible well after civil twilight, but you need a clear level horizon to see it at its best.

Saturn is visible in the early evening setting around 10:30 pm local time. Saturn is no longer a viable telescopic target, being too close to the horizon when the sky is fully dark. Saturn continues to sink into the western evening skies as the week progresses but the line up with the crescent Moon on the21st is very nice.

The constellation of Scorpio is still a good guide to locating Saturn. The distinctive curl of Scorpio is setting but still projects above the north-western horizon, locate the bright red star, Antares, and the look to the left of  that and above, the next bright object is Saturn. Antares is only briefly visible in the twilight though. 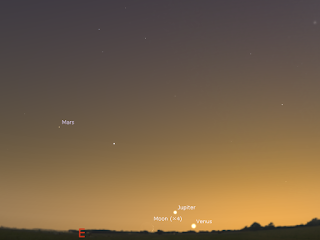 Morning sky on  Saturday November 18 looking east as seen from Adelaide at 5:33 ACDST (30 minutes before sunrise). Venus is bright just above the horizon and forms a triangle  with the thin crescent Moon and Jupiter.

Venus  continues to lower in the morning sky. This week Venus is close to Jupiter the crescent Moon. It is becoming very difficult to see Venus in the twilight, and you will need a clear unobstructed horizon to see the Venus low in the twilight.

Jupiter climbs higher in the morning twilight and is close to Venus and the crescent Moon on 18th. You will need a clear, level unobstructed horizon, like the ocean or desert, to see this, and you will need binoculars to pick up Jupiter. 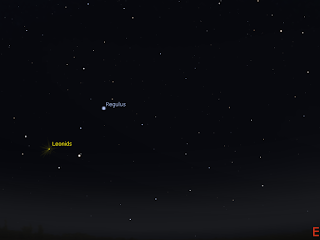 Morning sky looking north-east as seen from Adelaide at 4:00 am local daylight saving time on Wednesday November 18 and Thursday November 189 showing Jupiter, Mars and Venus near Leo, with the Leonid Meteor shower radiant indicated with a starburst. Similar views will be seen elsewhere at the equivalent local time. Click to embiggen.

On the morning of Saturday November 18 the Leonid Meteor shower peaks (from the point of view of Australians, that's 17 November UT), with the best time being between 3-4 am. However, there may be another peak on the morning of the 16th (16th UT)

Despite the peaks, very few meteors will be visible (maybe one every 5-10 minutes).