The Full Moon is Saturday, November 4. Jupiter is lost in the twilight.  Mercury climbs higher in the evening twilight and meets delta Scorpii on the 7th. Saturn is visible in the early evening in the heart of the Milky Way.  Venus is now very low in  the morning twilight while Mars rises higher.

The Full Moon is Saturday, November 4. The Moon is at perigee, when it is closest to Earth, on the 6th. 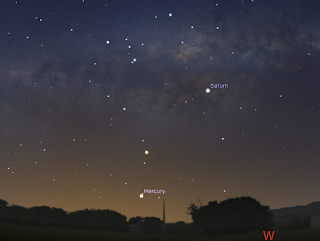 Evening sky on Tuesday November 7looking north-west as seen from Adelaide at 20:36 ACDST  (45 minutes after sunset). Mercury is low above the horizon close to the star delta Scorpii.

Mercury is setting in early evening and is above the western horizon in the twilight. Mercury is becoming more prominent, and is well worth watching as it rises into the evening sky, heading towards the head of Scorpius the scorpion. On the 7th, Mercury is close to the moderately bright star delta Scorpii in the head of the scorpion. Thi is the first of an interesting series of encounters over the coming weeks. 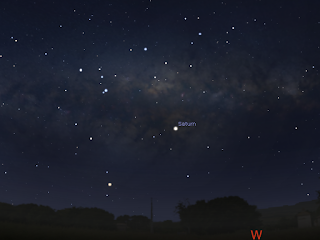 Evening sky on Saturday November 4 looking west as seen from Adelaide at 21:22 ACDST, 90 minutes after sunset.

Similar views will be seen elsewhere in Australia at the equivalent local time. (90 minutes after sunset, click to embiggen).

Although reasonably high in the early evening sky, Saturn continues to sink into the western evening skies as the week progresses.  Saturn's rings are visible even in small telescopes and are always good to view. 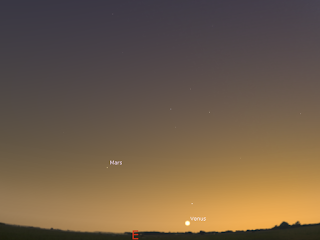 Morning sky on  Saturday November 4 looking east as seen from Adelaide at 5:44 ACDST (30 minutes before sunrise). Venus is bright just above the horizon and forms a line with Mars.

Venus  is lowering in the morning sky. This week Venus forms a line with  Mars. It is becoming much harder to see Venus in the twilight, and you will need a clear unobstructed horizon to see the Venus low in the twilight.