In the Aftermath of the March 19 “Supermoon” 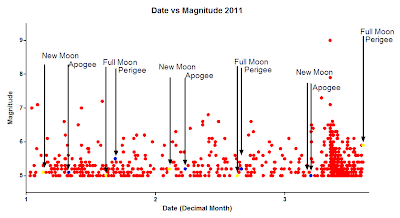 Not much happened, no major earthquakes, or clusters of minor earthquakes. Well, astrologer Richard Nolle actually cleared up his definition of what a “supermoon” is (compare with the wording here).

It turns out it’s any full Moon with a perigee closer than 361585 Km (a bit closer than the average perigee distance of 357372 Km). The justification for this distance is pretty much non existent, but even the closest “supermoons” have a tidal force only 4% greater than the “supermoon” cutoff. Also, recall that in Astronomical terms “Full Moon” is when the Sun and Moon are exactly aligned. For us ordinary folks wandering out in the evening, Full Moon is from Moonrise to Moonset on the night of the Astronomical Full Moon and I think this is the form of “Full Moon” that Nolle is using. In terms of wandering out and looking up at the Moon (and failing to see any actual difference without a telescope and a photographic record), this is perfectly okay.

However, in terms of earthquake generation, the alignment of the Moon and Sun is critical. You can imagine that the flexing of the Earth as the lithosphere tide (all 30cm of it) passes through the Earth might set off an earthquake that was already “ready to blow” as it were. Indeed, there is a week correlation between the lithospheric tides associated with Full/New Moon and a subclass of shallow earthquakes (increasing the probability of this subclass of earthquakes by less than 1%). 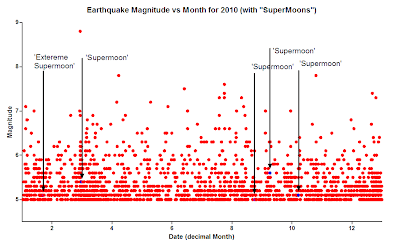 For example, Mr. Nolle lists the February 27, 2010 Full Moon as a “supermoon”. It is is 357831 Km away (about 3% greater tidal force than Nolles cut-off). But perigee occurs 18 h before the full Moon so the overall tidal force is lower.

Now Mr. Nolle points out that the February 27, 2010 Full Moon occurs not far from a 8.8 magnitude quake. However, in any given year there are 1319 quakes between magnitudes 5-5.9, 134 earthquakes of magnitude 6-6.9 (this includes the earthquake that demolished Christchurch), 15 earthquakes of magnitude 7-7.9 and 1 earthquake of 8 or greater. So, choose any random date and within +/- 3 days of that (the window used by Mr Nolle) you will almost certainly, on average have two-three quakes of magnitude 6-6.9 in that date range and a roughly 25% chance of having a larger magnitude quake in that time slice. So just having one magnitude 6 or greater earthquake near a supermoon is not particularly surprising. Indeed, in 2010 there are 4 “supermoons” and 1 “extreme supermoon” (Perigee of 356592 Km 2 h after full Moon), none of which are associate with any earthquakes more than we would expect by chance (see chart above). The complete lack of any significant activity associated with the January 30 “extreme supermoon” is telling.

Mr. Nolle has a number of examples of Full Moons near earthquakes, but again this is just cherry picking, we expect some to turn up by pure chance alone. Mr. Nolle emphasises that the Christchurch magnitude 6.3 earthquake is in his time range around a "supermoon", but you would expect at least 2-3 magnitude 6 or greater quakes in that time frame (and there 3 in this range, exactly what you would expect by chance). By ignoring all the Full/New Moons that are not associated with earthquakes you can make it look as if there is an associate where there isn’t one.

I’ve plotted the frequency of all earthquakes of 5 or greater in 2011, showing the times of New and Full Moon, and apogee and perigee (see diagram at the top of the post, the yellow symbols are full/New Moon, blue symbols times of Perigee/apogee). If Mr. Nolle is right, we should expect more earthquakes around aligned Moons near perigee, if fact you can see there is no association at all. The big earthquake that devastated Japan occurred just off apogee, during first quarter, when the tidal force was quite low. 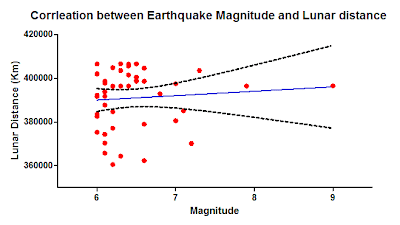 We might also expect that earthquake magnitude would correlate with perigee closeness (when the tidal field is strongest), so I plotted the magnitude of all quakes in 2011 (up to the first Japanese quake, after that he subsequent quakes are aftershocks from the main quake, and not independent) against the lunar distance at the time of the quake (to the nearest minute).

I have shown the regression line and its 95% confidence limits. The line slope is not statistically significantly different from zero, ie there is no relationship between earthquake magnitude and lunar distance. To do this properly, you need to calculate the total Sun-Moon tidal force and use more data points (I leave that as an exercise for my readers, times of perigee and full/new Moon from Inconstant Moon, Distance at UT time from SkyMap, Earthquake data here), but any association as obvious as Mr. Nolle claims would stand out). 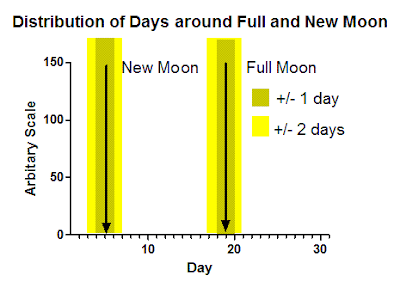 So, the “supermoon” was beautiful, but not baleful, despite Mr. Nolles dire predictions.

Comments:
I'm curious to know how the 30 cm tide is measured. I guess GPS these days, but back when I were a lad, we didn't even have any useful satellites, just dog kennels and beepers. Yet I recall reading about the extent of the lithospheric tide, I'm sure!

I read his article as Mr. Nolle essentially saying "none of the sceptics understand me".

What a load of post hoc ergo propter hoc.

I'm intrigued by your plot of moon distances and quake magnitude. I'd like to identify quakes that occurred in the past when a full or new moon was close to perigee. Could you direct me to a data set that I could use to do this?
As I understand it the Japan quake on 11 March occurred during first quarter moon. The full moon of the cycle later was synchronous with perigee on the 19th.

Look up in the main body of the post for direct links just after the plotted moon distance / quake magnitude diagram. I used the downloadable USGS data set and Inconstant Moon.

Perigee Moon, March 20th 2011, 4:40 am
Now Showing at the Balck Diamond Gallery Port Ade...
Carnival of Space #189 is here.
Filtered!
March 20th's Big Full Moon- You Have to Be Up Early
MESSENGER live webcast on NOW!
On the Radio Once More
Comet 2010 X1 Elenin for Celestia and Stellarium
When is a Full Moon Not a Full Moon?
MESSENGER Orbits Mercury on 18 March