Carnival Of Space 83 - The Antipodean Edition 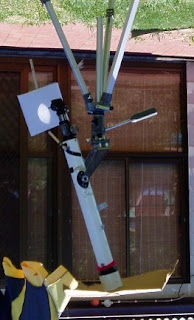 Welcome to the 83rd Carnival of Space, the Antipodean edition. While I can't possibly compete with the Videotastic edition, there are lots of great astronomy posts out there that can speak for themselves (if they could actually speak, that is, because you will be reading them rather than listening to them and its the authors rather than the blog per se that talks/writes anyway and .. well, you get the idea).

Down to Earth: Mike Simonsen ponders on whether astronomy is an obsession or a hobby (the answer is that its a hobsession, of course). If you are hobsessional about your astronomy, then you will be steamed by the news that CNN (apparently a news provider important to northern hemispherians, we have Aunty ABC Science Online) has dropped its science coverage, John Benac tells you why and how you can let your concern be known. To cheer yourself up, you could watch this classic Space Video of the Day.

Rather than watch TV, you could take a look at the sky instead. Alan Dyer takes an Earth bound, but gorgeous, Trip to Orion (we antipodeans get to see Orion without all that white stuff making our toes fall off). I show you how to watch the variable star Mira brighten. You can use all this sky watching as a prelude to getting ready for IYOA 2009, Music of the Spheres shows you how.

:
Lots of people were fascinated by Mars this week. Starts with a Bang thinks Mars is possibly the most awesome planet ever. After seeing the images of sedimentary layers on Mars, they just may be right. After seeing the stunning Mars in HiRISE 3D at Cumbrian Sky, I'm sure they are (make sure you have your red-blue 3D specs with you for this one). Paul Scott Anderson of The Meridiani Journal has great images of seasonal freezing and thawing on Mars. Speaking of freezing, Emily Lakdalwalla of the Planetary Society uncovers buried glaciers on Mars.

If you think Mars is the coolest place, and want to visit, Bruce Cordell at 21st Century Waves thinks Russia and China are taking the smart road to Mars.

Other bits of unimportant dust and gas: 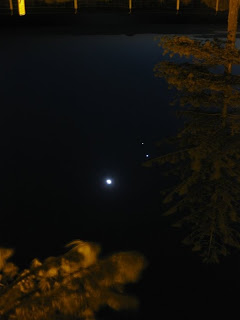 If, like me, your skies are clouded out at the moment, you can catch up on what you are missing with the Geminid Meteor Shower over at My Dark Sky. High above us looking down is the Columbus Laboratory on the International Space station, the Orbital Hub tells all about this fascinating zero G laboratory.

Further out, Supernova Condensate tells us about autumn on a world that doesn't get as much attention as it should, Ganymede, the only Moon with a magnetosphere.

A Babe in the Universe reports on another Moon, this time the Water Fountain of Enceladeus. Does a tiny black hole hide in the heart of this Moon?

Colony Worlds presents One Solar Space Power to Rule Them All, a road map for space exploration and colonization of the solar system, one Moon at a time.

Of course, to get to these far reaches you need power. The Next Big Future talks about Laser Inertial fusion/Fisson energy as a commercial source of power, while Centauri Dreams discusses a Micro Fusion Descendent of Daedalus (the atom bomb propelled spaceship). Power is fine, but all this thrusting into space raises a mighty thirst, so why not quench yours with a beer from space? Mind you, as Ian O'Neill of astroengine points out as he talks about the links between beer and the colonization of space, only 100 litres of space beer have been made so far.

Finally, Alice's Astro Info covers the spectrum by talking about rainbows and stars.

Beyond the Solar System

:
One Astronomers Noise talks about Seeing Extrasolar Planets. This is part 1 of a series of blogging on peer-reviewed papers looking at Fomalhaut b.

Will Gater is astounded by the black hole that has been confirmed to exists at our galaxies centre, and has a link to a marvelous video of stars orbiting the black hole. Chris Lintott ponders the links between roulette and Cosmology (and art happens along the way).

Well, that's it for this weeks Carnival of Space, hope you enjoyed the Antipodean perspective.

Comments:
Here's some animated space, right back to the Big Bang (well the last one anyway) and illuminating a bit about the up & coming subject of fusion energy. Its a short film... http://www.hiper-laser.org/hiper_dvd01.wmv

hi Ian,
do you want to exchange a blogroll link with my space blog?
http://www.ghostnasa.com/

I guess one man's unimportant gas and dust is another man's prospective academic career... :P