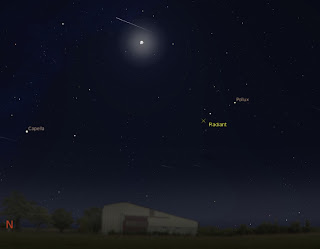 The view of the north eastern horizon around 1 am daylight saving time as seen from the southern hemisphere. The radiant, the point where the meteors appear to come from, is marked with a cross. The meteor numbers are illustrative, you are unlikely to see more than one at a time. (click on chart to enlarge it).

The Geminids are a fairly reliable meteor shower, with rates of about a meteor per minute. Unfortunately, this is a bad year for Geminids. The peak is predicted to be around 10.00 am (AEST) on the 14th, during daylight in Australia. As well, the nearly full Moon is not far from the radiant, so you are likely to be only able to see the relatively rare very brightest meteors.

The radiant doesn't rise until just before midnight (daylight saving time) in most of Australia, so you will still have to disturb your sleep for this one. At 1.00 am in the morning AEDST (midnight, AEST) Castor (alpha Geminorum) is about two handspans above the horizon and 10 handspans to the left of due north. Pollux, the other twin, is less than a handspan to the left again. The radiant is just below Pollux (see diagram). A black and white printable spotters map is here. Unlike the Leonids, where there is a very narrow peak of high activity, the Geminids have a broad peak and will show good activity well before and after the peak, and on the day before and after. While the glow of the Moon will drown out all but the brightest meteors, it will still be worthwhile watching the occasional beauty shoot across the sky.

The Geminids are a great grand finale meteor storm to end the year...here's some fun facts about the Geminids I had to put together!