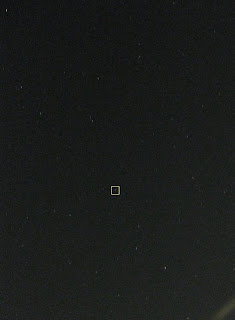 The star Mira shines at roughly magnitude 4.2 in this image of the sky taken on 28 November 2008 (click to enlarge, otherwise the stars are a bit to dim to see).

While most stars seem to shine with a constant brightness, there are some that undergo regular, dramatic change in brightness. Few of these are visible to the unaided eye, but two classics are Mira and Algol.

Algol is a bit hard for most of us in the southern hemisphere, but Mira is very easy, and Mira (omicron ceti), a star in the constellation of Cetus the whale, is a long period pulsating red giant and changes brightness from below naked eye visibility to a peak of round magnitude 2 (roughly as bright as gamma Crucis in the Southern Cross) in around 330 days. Mira will peak magnitude later this December, and will brighten visibly over this month. 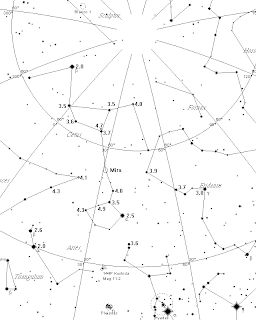 Here's a activity for the next few weeks, record the changes in Mira's brightness. This will be difficult for the next few days, as the bright Moon will be nearly on you o f Mira, making the stars hard to see. However, after a few days you will be able to see the stars with reasonable ease.

Click on the chart to enlarge it and print it out. Use a torch with red cellophane wrapped around the business end to view it while star gazing (to keep your night vision), and wait for at least 5 minutes outside for your eyes to dark adapt. Cetus is just above the easily recognized Taurus above the northern horizon in the early evening. This would be an ideal activity for kids.

I fyou liked the Mira piece, then you might like the piece I have just done on Algol.

Spaeking of the AAVSO writers bureau, I have edit access, but should I let AAVSO folks nominate a post of mine, or can I put up my own posts?