So, How was your eclipse? 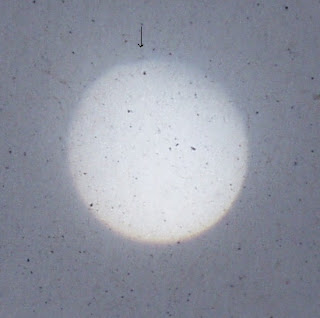 Mine started off cloudy and rainy. I had bought my binocular projection setup on the off chance that the cloud might part.

Come 2:30 there was sufficient holes in the cloud that I thought it might be worth a try. I set up my binoculars and sun shield. Unfortunately I had left the connector for the screen at home, but I improvised with LOTS of masking tape (tape, it's the universal engineering tool). The Sun was being unveiled occasionally, and I could see a definite chip in the side with the heavy duty solar specs.

The downside was that when the sun came out of a hole, I would quickly line up the binoculars, then it would go under cloud again, and by the time it came out the Sun had of course moved, and I had to realign everything again.

In the course of doing this this the setup came apart in a catastrophic but ultimately comic manner (masking tape does have its limits). I hastily reassembled everything, except the projection screen, which I had had to jam up against the tripod with my hand, while trying to take a photo with my other hand. This is the best shot, you can just see (if you are imaginative) the chip that represent 3% of the Suns surface being covered by the Moon (under the arrow). Then the clouds came in again. What's with all the black dots? I used speckled card to give the automatic focuser something to focus on, previous projection shots haven't worked too well as there was no obvious object to focus on.

However, when you are crouching down holding a piece of card in one hand, a camera in the other and trying to stay still, it just doesn't work. At least I amused the passing construction workers.

Sydney had lots of cloud and rain but some people got to see the eclipse. Here's some shots from NSW, QLD, and some great ones from Wellington NZ. See IceInSpace for more. Daniel Fischer mentioned in a comment on my previous post that there was an expedition in Antarctica looking at the eclipse, I wonder if we will see anything from them?

Partial Solar Ecplise Thursday February 7
Another Morning Lineup
A morning lineup
Venus, Jupiter and a Teapot
Carnival of Space 39 is here
Comet Holmes in STEREO
February 2008 Southern Skywatch is now up
Venus and Jupiter pair up
The Open Laboratory in Nature!
The 38th Carnival of Space is on the Case