The Orionids are a worthwhile shower that somewhat favours the Southern Hemisphere,best seen between 2-5 am, the radiant, the point where meteors appear to originate from, being just under Betelgeuse, the bright red star in Orion. The maps above show the views from Darin, Brisbane and Adelaide at astronomical twilight (90 minutes before sunrise). Similar views will be seen at the equivalent local time at similar latitudes (Adelaide stands in for Melbourne, Sydney and Perth)

The Orionids are the debris from Halley's comet. The Orionids maximum is on October 21 UT (October 22 Australian time, but the best rates are predicted to be on the 23rd as the Moon wanes).

This year the waning/crescent Moon rises after the radiant rises so won't interfere with the shower too much. 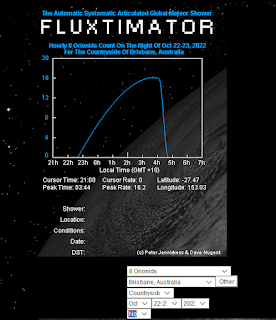 Nonetheless the best viewing is the morning of the 23rd, when between 3-5 am under dark skies you should see about a meteor every 4-5 minutes, although reasonable rates will be seen the mornings before and after (see table below).

You can find out the predicted rates for your location using the NASA meteor flux estimator (use 8 Orionids and make sure you set the dates to 21-22 October 2022).
Unfortunately, both Chrome and Firefox have changed their security settings to prevent plugins from running, and the flux estimator only runs under Internet Explorer now.
You can follow the progress of the shower at the IMO Orionids live page.

Choose a viewing spot where you can see a large swathe of sky without trees or buildings getting in the way, or with street-lights getting in your eyes. The darker the spot the better (but do be sensible, don't choose a spot in an unsalubrious park for example). Look to the north-east, and the distinctive red star Betelgeuse below the saucepan will be easy to spot with red Mars just below it. The meteors should originate just below here. However, let your eyes roam a bit to pick up meteors that begin their "burn" a fair distance from the radiant.

The following table shows the predicted peak rates at around the peak maximum local time (roughly 2 hours before local sunrise on the mornings of the 21st, 22nd and 23rd of October for a number of cities under dark sky conditions (rates under suburban or city light conditions will be lower). Rates will be similar at the same latitude as these cities, and rates will be intermediate at spots between these cities.