Tonight (27 September) Jupiter is at its closest Opposition since 1963 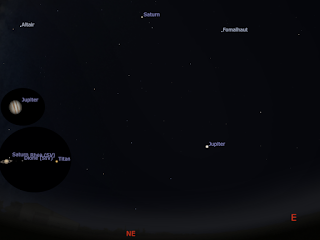 Evening sky on Tuesday, September 27 as seen from Adelaide at 19:46 ACST, 90 minutes after sunset (click to embiggen).

Evening sky on Tuesday, September 27 as seen from Adelaide at 19:46 ACST, 90 minutes after sunset (click to embiggen).

Jupiter is at opposition, when it is biggest and brightest as seen from Earth. Jupiter is visible all night.

Below Jupiter, Saturn forms a shallow triangle with delta and gamma Capricornii.

The insets are the telescopic views of Saturn and Jupiter at the same magnification at this time.

Similar views will be seen from the rest of Australia at the equivalent local time (90 minutes after sunset).

If you go outside now and look to the north-east you will see a bright golden point of light in the sky, the brightest object in the sky (aside from the Moon) at the moment.  That is Jupiter, at it's closest opposition since 1963. 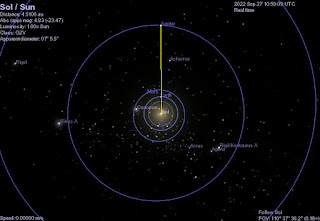 An outer planet is in opposition when earth lies directly between it and the Sun, the planet is fully illuminated and is brightest as seen form Earth. The pair are also closest at this point in time.

However, as planetary orbits are ellipses, not circles, some years Earth and the outer planet will be closer than others, and when Earth is at aphelion, when it is furthest from the Sun, and the planet is at perihelion, when its is closest to the Sun, we have the best view.

For Mars, these perihelic oppositions occur around15 to 17 years apart 9as Mar's year is roughly 1.9 earth years long, and it takes a while for perihelion and aphelion to come back into alignment) . There was an excellent one in 2003, a very good one in 2018 and the next good one will be in 2035.

If you are clouded out, don't worry, unlike Mars, whose disk swells and diminishes rapidly at opposition, Jupiter, being so much further away (and larger) grows and shrinks (and brightens and dims) so it will be brilliantly visible for may weeks to come. This is an excellent time to dust off telescopes and binoculars to observe the gorgeous planet and its shuttling Galilean moons.

Even small telescopes will show Jupiter's bands and perhaps even the great read spot. Binoculars will readily show the bright moons moving from night to night.